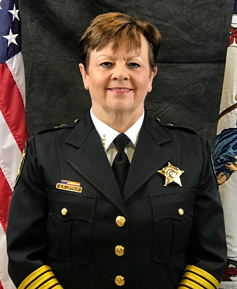 Beth Arthur’s career with the Sheriff’s Office began in 1986 when she was hired as the Budget and Personnel Analyst. She was promoted to the Director of Administration in 1988 overseeing all human resource, budgeting and information technology functions. These experiences led to her judiciary appointment to Sheriff of Arlington County in July 2000 and subsequent election in a special election in November 2000, with re-elections in November 2003, 2007, 2011 and 2015. Sheriff Arthur was not only the first female Sheriff in Arlington County, but also the first female County Sheriff in the Commonwealth of Virginia. She is currently one of approximately 40 female Sheriffs in the United States. Sheriff Arthur commands a staff of 271, managed an average daily population of 449 for CY 2012, administers security of the Courthouse and oversees a $35.7 million budget.

Sheriff Arthur is a lifetime member of Leadership Arlington, Class of 2001, a former member of the Board of Regents and served as Chairman for the term 2011-2012.

Beth resides in Arlington, Virginia with her family.