Nearly 100 years ago this month Alexandria County—which included what is now Arlington—organized a large parade to celebrate the homecoming of soldiers from World War I. The lavish program included speeches by state representatives and notable veterans, music performances, sack races, prizes for best vehicle decorations, and aircraft maneuvers overhead. 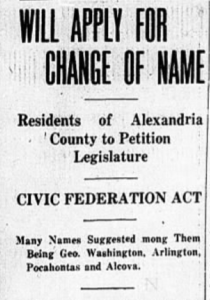 However, confusion over the event’s location resulted in an action that would impact the future of both Arlington and Alexandria.

The letter asserted that Alexandria County was

The Federation suggested that what Alexandria County needed was a new name. They urged Gazette readers to send a letter to Delegate Charles T. Jesse (at the Alexandria County Court House, Clarendon, VA) to support or oppose the name change and suggest a new name for the County.

Proposed names included George Washington, Arlington, Pocahontas, and Alcova (ALexandria COunty VA). If Mr. Jesse received enough letters supporting a name change, the Federation said, he could put forward a bill in its favor at the next Virginia legislative session.

This is the first of a series of news stories related to the Arlington County Naming Centennial Commemoration. Check back in January 2020 to find out what Mr. Jesse proposed at the January 1920 legislative session – and what happened next.

The Arlington County Board today took action on dozens of items -- here are some of the highlights.