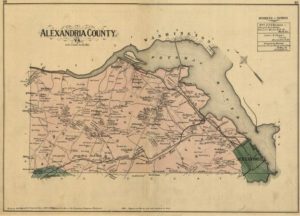 One hundred years ago today, on January 16, 1920, Delegate Charles T. Jesse of Clarendon proposed a bill in the Virginia General Assembly to change the name of Alexandria County to Arlington to avoid confusion with the City of Alexandria. (See 100 Years Ago: Call to Rename Alexandria County “Arlington”.)

“Arlington” was chosen from the names proposed by members of the Alexandria County Civic Federation and concerned residents who were frustrated that the County was frequently overshadowed by the nearby city. Other contenders for the new name included George Washington, Pocahontas, and Alcova (ALexandria COunty VA). The name “Arlington” was selected because both Arlington National Cemetery and Arlington House are located within its borders.

According to the 1920 Census, there were 16,040 residents in Arlington County, which included sections of Del Ray and the City of Alexandria that were part of the County at that time. The County was also home to small crop and dairy farms. Arlington’s population has increased dramatically since then, with more than 226,000 residents estimated in 2019; the last operating dairy farm closed in 1955. Today, Arlington is a diverse and inclusive world-class urban community with a population that continues to grow at approximately 1% per year. The upcoming 2020 Census is expected to reflect this trend.

Check out the following resources to learn more about Arlington’s history: