On July 26, 1990, the Americans with Disabilities Act (ADA) was signed into law, ensuring the civil rights of people with disabilities. This legislation established a clear and comprehensive national mandate for the elimination of discrimination against individuals with disabilities. On July 26, 2020, the 30-year anniversary of the signing of the ADA, Arlington County will celebrate and recognize the progress that has been made by reaffirming the principles of equality and inclusion and recommitting our efforts to reach full ADA compliance.

Become a part of the celebration and re-commitment to the ADA throughout the year by taking the ADA 30th Anniversary Pledge.

“While we have made progress over the past 30 years, there is still work to do to advance full accessibility in our community,” said Rosemary Ciotti, Chair of the Arlington Disability Advisory Commission. “When we provide access for people with disabilities, we provide access for everyone.”

In taking the pledge, organizations join the Arlington County Commissions and Advisory Boards in a commitment to ­­­advance accessibility for Arlington residents, businesses, and visitors.

The County Disability Advisory Commission directs attention to, and advises the County on ways to meet, the full range of needs of individuals with sensory and physical disabilities and assists in seeking compliance with federal and state legislative mandates.

The ADA has expanded opportunities for Americans with disabilities by reducing barriers, changing perceptions and increasing full participation in community life. However, the full promise of the ADA will only be reached if everyone remains committed to continued efforts to fully implement the ADA.

As we celebrate this milestone, it is also a reminder of the importance of ensuring that all members of the Arlington community with disabilities are represented in the 2020 Census. Every person in our community – regardless of age, race, or ability – needs to be counted in the Census.

Today, nearly 61 million people in the U.S. live with a disability, and according to data estimates from the Census Bureau, more than 6 percent of Arlington’s population lives with a disability. Taking the Census is crucial to ensure that people with disabilities are accurately counted and represented in the local, state and federal levels of government. Funding for numerous important programs in Arlington that support members of the  community with disabilities are also tied to Census data, such as Medicare, Medicaid, education programs, and public transportation.

For the first time, the 2020 decennial Census is available online, and the Census has taken steps to ensure that this will be the most accessible Census yet, including improving its website and offering more resources to take the census for those with disabilities.

Accessible Ways to Take the Census

Whether you are completing your form online, by phone, by mail, or in person, the Census has set up a number of ways to make sure your census form is accessible.

Arlington County Government is committed to the true spirit of the Americans with Disabilities Act, striving to ensure that persons with disabilities can access services, participate in programs and benefit from all community resources, ensuring that Arlington County is a community that includes all its residents. Accommodations are available upon request. 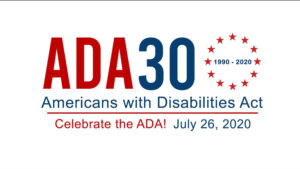 On Thursday night, the Arlington County Board voted 5-0 to authorize the County Attorney to join the County as a...