“The winner of the 2018-19 Decal Design Competition is Schuyler Workmaster, an 11th grader at Bishop Denis J. O’Connell High School, for her design, ‘The Arlington Skyline and Potomac River,’” announced Treasurer Carla de la Pava today at the County Board meeting.

Workmaster’s design, which features a pastel drawing of the Rosslyn skyline and the Potomac River, will appear on more than 160,000 vehicles in Arlington County. In her Decal Competition application, Workmaster noted that her piece, “…fuses both the nature and city aspects of Arlington. The juxtaposition of the serenity of nature and the bustling city behind it shows that Arlington is both beautiful and cosmopolitan. My piece represents how different parts of Arlington come together to form one community.”

The Treasurer’s Office used Instant Runoff Voting for the third year to determine the winner. Residents were asked to rank their selections in order of preference (first choice through fourth choice). “It’s hard to choose just one, so IRV allows voters to express a range of preference,” said de la Pava. During the six-week voting period, a record-breaking 3,600 Arlington residents voted.

Workmaster will receive a cash prize of $750, thanks to the generosity of the Arlington Community Federal Credit Union. The three runners-up will each receive $500.

The other finalists were (in alphabetical order):

Arlington began requiring local licensing of vehicles in 1949, which took the form of a metal tag attached to the license plate. The first windshield decal was issued in 1967; decals were first produced with a color image in 2000. In 2002, residents were given the opportunity to vote on the decal image, and in 2005 the Treasurer’s Office started the Decal Design Competition for Arlington high school students. 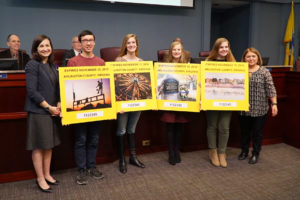 The Potomac Yard Park is named Short Bridge Park, and has a Master Plan and Design Guidelines.