The Arlington County Board today approved the County’s proposed direct financial incentive to Amazon, an annual pay-for-performance grant valued at approximately $23 million, tied to the company meeting targets of occupying 6 million square feet of office space over the next 15 years.

The incentive will come from a percentage of the new incremental revenue generated by the County’s Transient Occupancy Tax (TOT), which is a tax paid on hotel rooms or other paid lodging.

“This performance agreement is really just the beginning of what I believe will be a long and productive partnership between Arlington and Amazon,” Arlington County Board Chair Christian Dorsey said. “This Board, and senior County staff, have spent months in intense discussion with our community about what Amazon’s arrival in Crystal City and Pentagon City will mean for Arlington. Our vote today reflects our strong belief that Amazon will bring significant benefits to our community, to neighboring Alexandria, the region and the state.

“I view this agreement as a new model for economic development, where most resources are devoted to improvements in infrastructure and developing human capital,” Dorsey said. “Only 5 percent of the incentives are paid directly to Amazon, and only if they are successful in contributing to revenue growth while fulfilling their commitments to invest in Arlington.”

The Board voted unanimously to approve the performance agreement with Amazon, after hearing from more than 100 speakers during an hours-long public hearing and questioning Amazon executives. 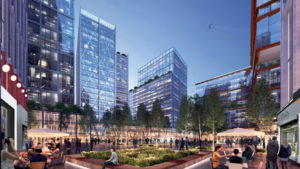 County to use portion of TIF for infrastructure improvements near HQ2

The County also committed to using a portion of new incremental revenue generated by Amazon’s arrival within the existing Crystal City, Potomac Yard, Pentagon City Tax Increment Financing (TIF) area to make strategic infrastructure investments in and around National Landing. The estimated new TIF revenue is projected to be $28 million over 10 years. TIF is a mechanism to support development and redevelopment by capturing the projected increase in property tax revenues in the area and investing those funds in improvements in that area.

The County and the City of Alexandria also have committed to investing up to $570 million in transportation projects, including rail connections, transit facilities, multi-modal streets and transportation technology serving Amazon’s headquarters. All the projects were already included in long-term Capital Improvement Plans approved by the Board and the City. Arlington and Alexandria are also actively pursuing additional funding opportunities to advance investments in this corridor.

The Board, and senior County staff, have heard from thousands of Arlingtonians, through dozens of community engagement opportunities, including virtual panel discussions, town halls, community listening sessions, and Saturday’s public hearing. The County has maintained and continuously updated a robust website on all aspects of Amazon’s HQ2 plan, and produced numerous flyers. Amazon has maintained its own website to answer questions on key topics from the community.

As part of its incentive package, the Commonwealth of Virginia has proposed more than $1 billion for a Tech Talent Investment Fund. The fund is expected to produce 25,000 additional bachelors and master’s degrees throughout Virginia in computer and science related fields.

The Commonwealth also plans to provide new resources related to computer science education statewide, access that will be available to Arlington and Alexandria public schools. These new resources will include ongoing professional development for current and future teachers; high-quality curriculum and related resources; summer and after-school programming for students, and meaningful career exposure and work-based learning opportunities in high-demand fields.

Arlington has partnered with neighboring Alexandria, which will be the home of a new $1 billion Virginia Tech Innovation Campus. The new campus will be designed to increase graduates in STEM- related degrees, providing a qualified tech talent pipeline for technology companies in Northern Virginia and beyond. It will be funded with $250 million from the state’s Tech Talent Investment Fund, a matching $250 million from Virginia Tech and another $500 million from the private sector, to build a planned mixed-use component on the site.

More funding for transportation will be available from the Commonwealth if Amazon creates more than 25,000 jobs.

Amazon’s choice to locate in the area dubbed National Landing comes as the region is intensifying its efforts to increase the supply of housing and investing more in affordable housing. Arlington and Alexandria already have strong existing commitments to funding and supporting efforts to create, protect and preserve affordable and workforce housing. With new revenues generated by Amazon, both communities will fund affordable housing, workforce housing and public infrastructure.

The two communities together plan to invest at least $150 million over the next decade in affordable housing, resulting in the creation and preservation of 2,000 to 2,400 affordable and workforce units in and around the Crystal City, Pentagon City and Columbia Pike areas and throughout Alexandria. Of that, Arlington plans to invest $7 million a year for 10 years, with the goal of creating 1,000 affordable housing units in and around the Amazon project area.

The Commonwealth of Virginia has also pledged to provide $15 million per year for five years, at least, to support housing affordability in areas impacted by Amazon.

Amazon announced in November 2018 it had selected Arlington County from more than 230 jurisdictions from around North America for its new headquarters, commonly referred to as HQ2. The announcement capped a 14-month process that had galvanized Northern Virginia localities to form a multi-jurisdictional partnership in their bid for the headquarters.

To view the staff presentation and read the staff report and the performance agreement, visit the County website. Scroll to item no. 29 on the agenda for the Saturday, March 16, 2019 Regular County Board Meeting.

More in Business, County Board

Changes to the Zoning Ordinance and local Codes will increase availability, accessibility of high-quality child care.