The Arlington County Board today approved the redevelopment of the Food Star grocery store site at the corner of Columbia Pike and S. George Mason Drive. The proposed Form Based Code development, initially named Village Center, includes a mixed-use six-story apartment building with 365 market-rate units, more than 31,000 square feet of retail, underground parking, a new full-service grocery store and a public square at the prominent corner.

“This is an exciting project that will bring more vitality to an important intersection on Columbia Pike and we look forward to its completion,” said Arlington County Board Chair Libby Garvey.  “Over the next months, we will be working to see that the people who depend on the grocery store for their food will have other near-by options during construction and beyond.”

The Board unanimously approved a resolution rezoning the site from “R-6” One-Family Dwelling District to “CP-FBC” Columbia Pike Form Based Code Districts, and approved a use permit for the development.

The plan approved by the Board will replace an older grocery store, small retailers and a surface parking lot on the three-acre site with a new apartment building, 31,530 square feet of ground-floor retail, and a 50,000 square-foot grocery store.

The 22,150 public square will serve residents of the apartment, and the community, as a place to sit, enjoy the surrounding, or hold small-scale events and gatherings. A garden, public art and a water feature are planned for the square.

The three-level parking garage will have 604 spaces for cars, 128 reserved spaces for bicycles and 24 shared bicycle spaces for visitors.

A joint meeting of the FBC AWG and Site Plan Review Committee (SPRC) discussed the requested FBC modifications associated with this project on January 21, 2016. The two groups expressed general support for the revised design and indicated proposed design is appropriate.

The Planning Commission discussed the proposed Village Center plan at its meeting on February 10, 2016. The Commission voted unanimously to recommend approval of the project including its three requested modifications to the FBC.

The County Board adopted the CPI in 2002 and updated it in 2005. A second FBC was subsequently adopted by the County Board in 2013, focusing on residential areas located in-between the commercial centers and implementing the vision established in the 2012 Neighborhoods Area Plan.

Since the creation of both Form Based Codes, 381 new market-rate units and 173 Committed Affordable Units (CAFs) have been approved in Central Pike, the area of the Pike between South Four Mile Run Drive and South Glebe Road. 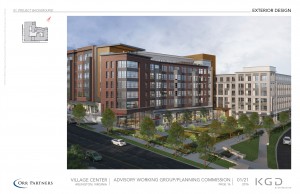 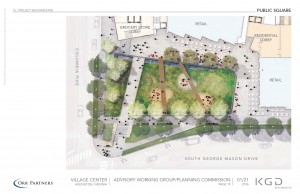 The County Board adopted changes to the General Land Use and Master Transportation Plans, and the Zoning Ordinance.