The Arlington County Board today approved site plan amendments to Pentagon Centre by developer Kimco Realty that allow for a re-ordered phased redevelopment that includes modest increases in residential, proposed retail and open space and a similar decrease in space dedicated to office and hotel uses. The overall density remains largely unchanged.

“This shift in how Pentagon Centre will be redeveloped is responsive to the market environment without compromising Arlington’s needs and plans,” said Arlington County Board Chair Mary Hynes. “We’re excited to be getting open space for residents and better road connectivity for shoppers along with two new residential buildings. Our goal is to enhance the live, shop, play experience in Pentagon City and create a place that fits well on this 17 acre site as we move forward.”

The County Board voted 5-0 to approve the Phased Development Site Plan (PDSP) and Phase 1 site plan amendments. The PDSP amendments include reallocating residential uses to the first phase of redevelopment, and moving the development of planned public open space from Phase 2 to Phase 1 of the redevelopment.

In addition, building heights and layouts have been modified, and the land use mix changed to have less office and hotel uses. The final site plan amendments permit residential uses in buildings originally approved for office development, as well as changes to parking, building footprints, and the provision of public open space.

The site is currently home to wholesale retailer Costco and other big-box stores, which will remain in place until their current leases expire. The approved changes are part of Phase I of the redevelopment. Phases 2 and 3 are planned to take shape over the next 20-35 years.

The newly approved site plan calls for 693 residential units in two buildings. The developer will provide 11 on-site affordable units and will, at their discretion per the County’s state-prescribed housing ordinance, provide additional on-site units or make a $1.7 million cash contribution to the County’s Affordable Housing Investment Fund (AHIF), a revolving loan used to finance affordable housing in the County.

The amendments required revisions to the existing PDSP conditions and a new set of site plan conditions. The Pentagon Centre Urban Design Guidelines also were updated to reflect these new amendments. Phase 1 of development is expected to begin immediately, with garage construction anticipated to begin in early 2016.

The second and third phases of development are expected to occur roughly 20 to 35 years from now, and will involve the demolition and redevelopment of all existing retail buildings (once long-term leases expire), creation of more than three additional acres of public open space, and an expanded street and pedestrian network.

Pentagon Centre is an approximately 17-acre parcel of land adjacent to the Pentagon City Metro Station. The current developer, Kimco Realty Corporation, acquired the site in 2004 with the intention of adding office uses while keeping the existing by-right retail development. In 2007, the County created a phased development site plan and a special general land use plan (GLUP) study for the site. The original site plans were approved by the County Board in July 2008.

To read the staff report for this item, visit the County website. Scroll down to Item #48 on the Agenda for the Monday, Sept. 21 County Board Meeting. 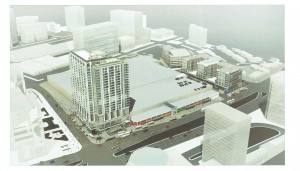 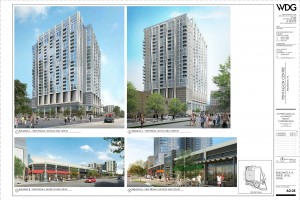