ARLINGTON, Va. – The Arlington County Board today approved PenPlace, a mixed-use, phased development site plan that will bring nearly two million square feet of offices, ground floor retail businesses, a hotel and the option of up to 300 residential units to the largest parcel of undeveloped land in Pentagon City.

PenPlace, bounded by Army Navy Drive, South Fern Street, South Eads and 12th Streets, lies just north of the Metropolitan Park phased-development site plan, a 16-acre, mixed-use project that is in its fifth phase of construction. The PenPlace phased development, as proposed by Vornado/Charles E. Smith for the 10.2 acre site, would occur over many years with future development proposals going through the final site plan approval process and requiring public review and approval by the County Board.

“We are reinventing Pentagon City,” said Arlington County Board Chairman J. Walter Tejada, “PenPlace is key to helping us transform this critical area of the County into a more transit-oriented, walkable, vibrant urban village. We believe that this project, coupled with other planned developments, the planned streetcar and other transportation improvements will help keep Pentagon City one of the most desirable areas in the nation to live, work and play.”

The County Board took five votes on this project. The Board voted 5 to 0 to adopt and amend the ordinance to the Pentagon City Phased Development Site Plan (PDSP). The votes will enable the Board to consider a future secure building through the site plan review process.

The Board voted 5 to 0 to approve the phased development site plan. To read the staff reports and other documents related to this project, visit the County website. Scroll down to Item No. 58 on the Agenda for the September 21, 2013 Regular County Board Meeting.

The development will include a series of connected open spaces built in the middle as the central green area, and contiguous open space linking with the Metropolitan Park project that is approximately 1.5 and 2 acres. To keep an active presence on the site, a future community facility of up to 20,000 square feet is planned. The facility will be located on the ground floor and within steps from the central green area.

The existing superblocks between the two sites will be broken up with planned new streets and sidewalks, creating a lively, pedestrian-friendly environment. Two new east and west streets, 11th Street South and 10th Street South, and Elm Street, a new north and south street, will run through the Pen Place site.

Pen Place, located within the Pentagon City Metro Station Area and within walking distance of the Crystal City Metro Station, is well-served by transportation networks, including Metro; Virginia Rail Express (VRE); local and regional buses; and the I-395 HOV lanes.

A streetcar line will run directly in front of Pen Place, with a station planned for 12th Street South. The Columbia Pike streetcar line, which follows Columbia Pike to Skyline, will connect Pen Place with office, retail, and residential west of Pentagon City. The Crystal City/Potomac Yards line will connect Pen Place with Crystal City, Potomac Yards, and the Braddock Road Metro.

The phased site plan will be the first for Arlington County stipulating maximum parking standard for commercial official space. The standard allows the developer to build fewer parking spaces; to ensure that excessive parking is not build.

A maximum of 1 space per 1,200 square feet of office/retail development is required. This would limit the potential number of spaces to a maximum of 2,000 spaces for the site, in underground parking garages. Considering that the development will be build out over a period of 15-20 years, parking demand will shift over time as more people will be using mass transit, walking or biking.

Sustainable design
As part of the County’s green building initiative, the developer is committed to achieving LEED Gold certification for the office buildings and LEED Silver for the hotel and residential uses. To learn more about this planned project, visit the County website; scroll down to Item 58 on the County Board Agenda to read the staff report.

Background
The Pen Place site plan is guided by Pen Place Urban Design Guidelines and the Pentagon City Phased-Development Site Plan (PDSP), an approved framework for the redevelopment of 116 acres of obsolete industrial uses to medium-density, mixed-use developments with an abundance of retail and access to open space.

With the approved amendment of the Pentagon City (PDSP), future final site plans for each of the proposed buildings will be considered based on the current plan for coordinated mixed-use development consisting of office, residential, hotel and retail uses.

The development is consistent with the County’s goal of encouraging smart growth and sustainable, walkable development within the metro corridors. 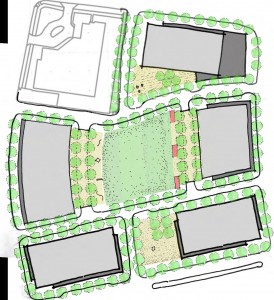 Rosemarie G. Bowie, a retired federal government attorney who lived much of her adult life in Arlington, has willed the...