Total absentee voters will likely reach the 43,000 level, double the figure for the last presidential election four years ago. That would also shatter the recent record for absentee voting set in 2008.

“We are about 50 percent higher than where we were at the same point in 2012 and believe we will exceed 2008’s numbers of nearly 35,000 absentee voters,” said Arlington General Registrar Linda Lindberg. “We are keeping pace with demand because we hired considerable extra staff in anticipation.”

A federal judge today ordered an extension for voter registration in Virginia to Friday at midnight. A computer system glitch created difficulties for some people trying to register before the original deadline of this past Monday.

In-person absentee voting will continue in Arlington County through Nov. 5. The three in-person absentee polling places are at Courthouse Plaza and the Walter Reed and Madison community centers. Check for days, hours and street addresses.

Applications for absentee ballots to be sent by mail must be received by the Registrar’s Office by Nov. 1 at 5 p.m. and returned by Election Day, Nov. 8, at 5 p.m., to be counted.

What to know about voting on Election Day, Nov. 8

Where to vote:  Check your polling place – it may have changed since you last voted.

When to go: Polls are open 6 a.m. to 7 p.m. To avoid crowds, the best times to vote are mid-morning and mid-afternoon.

What to bring: You must show a photo ID to vote, such as a Virginia driver’s license or ID card; any photo ID issued by the U.S. Government (military ID, passport) or state or local government; employer photo ID; or student photo ID from a Virginia school. Don’t have a photo ID? Arlington’s Elections Office can issue one for free.

Know what’s on the ballot: Ballots will list candidates for office, proposed amendments to the Virginia constitution and proposed County bond referenda. Review a sample ballot so you’ll know how you want to vote before you go to the polls.

General Registrar Linda Lindberg says voters should have full confidence in the Arlington election process and technology. “Our system is secure because our voting machines are not connected to any network. And the paper ballots that are marked before being scanned act as a back-up for the electronic tallies.”

Notices will be posted at each polling place as to who is permitted inside. Under state law, all other activities may take place no closer than 40 feet from the entrance to the polls.

The Arlington Electoral Board welcomes media representatives in and around County polling places before and on Election Day, as long as that presence is not disruptive to the smooth operation of the election, and voters and election workers do not feel uncomfortable or feel their privacy has been violated. 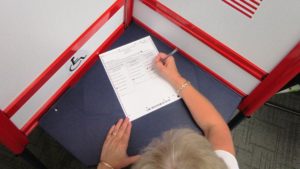 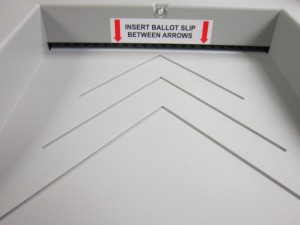 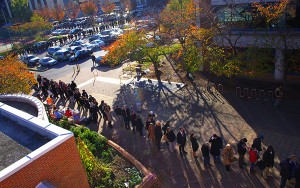