After years of maintaining the little-used 23rd Street pedestrian tunnel that runs under Richmond Highway in Crystal City, Arlington will request its closure from the state.

The County Board today approved a resolution to formally ask the state for the tunnel’s closure. VDOT has indicated that it is willing to approve the request, under terms that include VDOT providing $87,500 of the estimated $385,860 that it will cost to close the tunnel and remove its above-ground entrances. Arlington will pay the rest of the costs.

“People who need to walk across Richmond Highway at 23rd Street avoid this tunnel and instead use the street-level crosswalk,” Arlington County Board Chair Christian Dorsey said. “The County cannot afford to maintain it in perpetuity at the level it would take to keep it clean, well-lit and secure. With a safe, grade-level alternative available for pedestrians, it just makes sense to ask that the state close this tunnel.”

The Board voted unanimously to approve the resolution. Once the agreement is executed, VDOT will mobilize its contractor to begin the deconstruction, which is anticipated to begin this fall and last approximately six weeks.

The 2010 Crystal City Sector Plan envisioned the tunnel’s removal to facilitate major street improvements in the area, including the reconfiguration of the intersection of 23rd Street at Richmond Highway.

The 23rd Street Merchants and the Crystal City BID have long complained to the County that the tunnel and its canopy were unattractive and plagued with public urination and loitering. In 2014, the County found that 95 percent of pedestrians seeking to cross the highway at the tunnel chose to cross at street level rather than use the tunnel. After improving the crosswalk and signal over time, the County has determined that closing the tunnel will not make it any harder for people to cross Richmond Highway at 23rd Street. 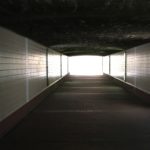 The County will advance improvements for pedestrians in late 2019, when it plans to improve 23rd Street between Richmond Highway and South Eads Street. During the next several years, the County also plans to reconstruct and realign 23rd Street between Richmond Highway and Crystal Drive to eliminate the wide median island so that the building sites on the north portion of 23rd Street South can be built in accordance with the Crystal City Sector Plan, a project that will hinge on the timing of redevelopment.  The Crystal City Sector Plan also included a phased closure of the tunnel.

Arlington spends between $20,000 and $25,000 a year for pressure-washing, weekly site visits and routine repairs of the tunnel.

County planning and transportation staff consulted with the Arlington Ridge and Aurora Highlands civic associations, the 23rd Street Merchants Association, the County’s Pedestrian and Disability advisory commissions and the Transportation Commission in May 2018 about the tunnel’s future.

To read the staff report, scroll to Item No. 59 on the agenda for the Saturday, July 13, 2019 Regular County Board Meeting.

The Arlington County Board has approved more than $200,000 in grants to Arlington non-profit arts organizations and individual artists.