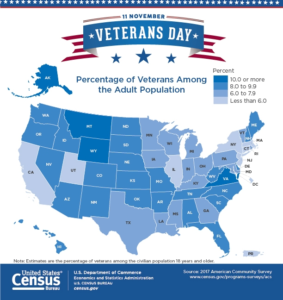 This year marks the 100th anniversary of Armistice Day, proclaimed by President Woodrow Wilson on Nov. 11, 1919, and known today as Veterans Day in the. U.S.

Most military households will be responsible for submitting their own 2020 Census form. Members of the military will be counted with their household if that is where they live, but active duty service members may face some special circumstances. According to the U.S. Census Bureau’s military fact sheet, here’s how to be counted if:

———
APRIL 1, 2020 IS CENSUS DAY! The U.S. Census counts every resident in the nation, including right here in Arlington County. As mandated by the U.S. Constitution, America gets just one chance each decade to count its population. The collected data helps to determine things like the number of seats Virginia has in the House of Representatives, and how to distribute federal funds to local communities like ours.

7 Steps You Can Take to Be Prepared, Not Scared Ahead of an Emergency

September is National Preparedness Month. Here are things you can do right now to make sure you’re ready the next time an emergency hits.

Which Arlington Neighborhoods Will See the Most Trick-or-Treaters?

How much candy should you buy? Census numbers could help!