The Arlington County Board today approved a redevelopment plan to replace the aging American Legion Post 39 at 3445 Washington Blvd. with a seven-story building that will include 160 affordable units atop a new Post 139. 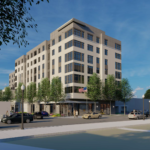 In a related action, the Board allocated a $5.79 million loan from the County’s Affordable Housing Investment Fund to help build the project.

“APAH’s partnership with the American Legion on this project is yielding real benefits for our community,” County Board Chair Christian Dorsey said. “We are adding much-needed affordable units to our inventory, and many of them are large enough for families. All of them will be within walking distance of the Virginia Square Metro. And at the same time, American Legion Post 139, which has supported our veterans for more than 70 years, will stay on the site and in our community, in a brand-new home where it will continue its mission to our service men and women.”

The project will add to the County’s affordable housing inventory in the Rosslyn-Ballston corridor, where less than 50 percent of a projected 5,000 affordable units needed by 2040 currently exist.

The existing American Legion Post is a deteriorating building that does not comply with the federal Americans with Disabilities Act. After determining that the building had outlived its useful life, the American Legion chose APAH as a development partner in 2017.

APAH plans to replace the existing building with a seven-story building that will taper to three stories on the northwest side, where it will be adjacent to a single-family neighborhood. A new ground floor American Legion Post will front on Washington Boulevard.

The site is in a transit-rich location adjacent to the Metro corridor and about one-quarter mile north of the Virginia Square Metro Station.

As part of the redevelopment, a super-block will be broken up by creating a campus-like design for a network of vehicle and pedestrian connections across the site, to support the creation of new mid-block connections between Washington Boulevard, Kirkwood Road, and 13th Street North. A new north-south street will be added along the western edge of the site, from Washington boulevard to the northern 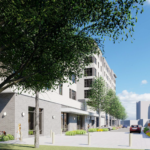 A parking lane will be added to the north side at Washington Boulevard. The sidewalk along the north side of Washington Boulevard will be widened adding a 10-foot wide sidewalk buffered from the street by new street trees. An underground parking garage will provide a minimum of 90 parking spaces. The developer will implement a Transportation Demand Management plan to encourage use of transportation alternatives to driving alone in a car.

The APAH building will be constructed to the Level Gold standards of Earthcraft, a green building certification program that certifies homes are sourced, constructed and designed to reduce environmental impacts. Gold level certification requires that the building also meets ENERGY STAR requirements.

Affordable for 75 years – most are family-size 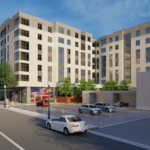 The County pursued an “involve” level of public engagement in reviewing this redevelopment proposal. The Site Plan Review Committee reviewed the proposal at three meetings. Representatives from the two civic associations surrounding the site, and a representative of the Lynnbrook Townhouses were official members for the SPRC process. The proposal also was reviewed by the County’s Housing, Transportation and Planning commissions. To read the staff report, visit the County website. Scroll to Item No. 24, A-D on the agenda for the Saturday, Feb. 23, 2019 Regular County Board Meeting.

In a related action, the Board allocated $5.79 million in Fiscal Year 2019 Affordable Housing Investment Fund loan funds to APAH to build the project. The proposed loan term is 38 years at a 1 percent interest rate. APAH is expected to submit a second request for $5.375 million in AHIF funding for the project in Fiscal Year 2020.

AHIF, funded by developers and state and local funding, is a revolving loan fund and the County’s primary source for funding affordable housing. Since its creation in 1988, AHIF has helped create the majority of Arlington’s more than 8,000 affordable rental units. It provides incentives for developers through low-interest loans for construction, acquisition and rehabilitation of affordable housing. To read the staff report, visit the County website. Scroll to Item No. 25 on the agenda for the February 23, 2019 Regular County Board Meeting.

The County Board set the stage for redevelopment of this and two other sites northwest of the Washington Boulevard and Kirkwood Road intersection in November 2017, with its adoption of a General Land Use Plan Study for the sites and the balance of commercial properties in the area fronting on Washington Boulevard.

The three sites currently are home to the YMCA Arlington campus, the American Legion Post 39 building and properties controlled by Eleventh Street Development LLC. The planning study yielded planning concepts and recommendations to guide coordinated redevelopment across the entire block. It identified and outlined guiding principles and desirable elements that should be incorporated into any future site plan application for redevelopment that is proposed for the block. The APAH proposal was found to be generally consistent with those principles.

The County Board ratified advertisements for March hearings on proposed changes to the Zoning Ordinance and local child care Code.