The Arlington County Board today approved a $1.6 million contract with Sagres Construction Corporation to build the first four of 23 transit stations planned for Columbia Pike. Construction is expected to begin this fall and be completed by fall 2020. 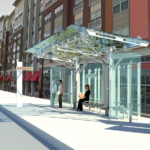 “Arlington continues to improve the transportation options and upgrade transit along this vital east-west corridor, which has the highest bus ridership of any corridor in Northern Virginia with more than 17,000 riders each weekday,” Arlington County Board Chair Christian Dorsey said. “These transit stations will be functional, safe, accessible and attractive. They are key to the community’s vision of transforming the Pike into an attractive, pedestrian-friendly ‘Main Street’ served by high-quality transit.”

The Board voted unanimously to approve the contract. To read the staff report, visit the County website. Scroll to Item No. 64 on the agenda for the Saturday, July 13, 2019, Regular County Board Meeting.

Transit stations are designed to shelter more passengers than a typical bus stop. The Columbia Pike transit stations will include real-time bus arrival displays, a higher curb for easier boarding, lighting for safety, and seating, and will be fully accessible. The design includes a large tinted glass roof and side windscreens to help protect from bad weather. Stations will be 80 to 120 feet long, to accommodate two transit vehicles.

The transit stations are a major feature of the County’s planned premium transit network connecting Columbia Pike, Pentagon City and Crystal City. The network will offer service that is fast, frequent, reliable and easy to use, with simplified bus routes, increased weekday and weekend service, and a new “one-seat ride” from Skyline to Pentagon City-Crystal City.

The first phase of service was implemented in June 2018 with a Metrobus 16 Line restructuring that streamlined 11 route patterns into five, while providing a net increase in service. Future phases will include a new Metrobus 16M, replacing the 16G/H/K, which will offer high-frequency service connecting Skyline, Columbia Pike, Pentagon City and Crystal City.

As part of the Columbia Pike premium transit network, the County plans to allow prepaid fare payment at the transit stations, which will allow for faster bus boarding. It’s working with the Washington Metropolitan Area Transit Authority and other Northern Virginia jurisdictions on a uniform approach for this technology to allow seamless movement between transit systems.

Construction of the remaining 19 stations, expected to be completed in summer 2023, will be coordinated with the County’s Columbia Pike Multimodal Street Improvements project, which is rebuilding of the  Pike’s utility infrastructure. The total budget for fabrication and construction of all 23 transit stations is $16.9 million, budgeted for in the County’s Capital Improvement Plan.