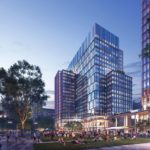 The Arlington County Board today approved a plan to transform 6.2 acres of Pentagon City’s Metropolitan Park from abandoned 1950s-era warehouses and surface parking into the first phase of Amazon’s new headquarters.

The approximately 2.1-million sq. ft. mixed-use project will be built at 1232-1450 S. Eads Street and 501 and 525 15th Street S. Two 22-story towers will front on S. Eads Street and on an expanded public open space within Metropolitan Park.

“This  project is extraordinary in many respects,” Arlington County Board Chair Christian Dorsey said. “It will bring us significantly closer to fulfilling the community’s vision of Pentagon City as an urban neighborhood with a better balance of office, residential and retail development, more and better public spaces, and more and better access for pedestrians and cyclists.” The new Amazon headquarters, Dorsey said, “comes with energy commitments that are unprecedented in Arlington, and with the single largest contribution ever made to the County’s Affordable Housing Investment fund. It also comes with the developer’s commitment to not only plan and build an on-site park, but to perpetually maintain it.”

In addition to two energy-efficient office towers, the project will include new and improved public open spaces; a $20 million affordable housing contribution; two new public streets; sidewalk and streetscape improvements; street, bicycle, and transit improvements; street level retail space and a shared underground parking garage. The towers will vary significantly in height across the site, from a low of three stories adjacent to the public spaces, with a central core up to 22 stories.

The towers will achieve LEED Platinum and Energy Star certification. They will be powered by an electric utility plant, with combustible fuels used only for the emergency generator back-up power and for commercial kitchen cooking. Green roofs are planned at several levels of the buildings. The developer agreed  that 100 percent of the electricity for its buildings will be supplied either by renewable energy produced on site, or through credits obtained from renewable energy produced off site and specifically dedicated to offset the energy used on the site.

The Board voted unanimously to approve the project. To read the staff report and staff presentation, visit the County website. Scroll to Item No. 40 on the agenda for the Saturday, Dec. 14, 2019 Regular County Board Meeting. 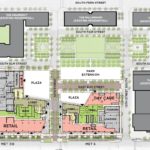 The site, bounded by 13th Street South, new South Elm Street, South Eads Street and 15th Street South, will include more open space than envisioned in the Pentagon City Phased Development Site Plan adopted by the County Board in 1976.

The project will yield significant community benefits, including a $20 million contribution to affordable housing in Arlington. That amount includes a $7.5 million base contribution consistent with the Arlington County Zoning Ordinance and $12.5 million negotiated on top of the base contribution. The $20 million will be provided to the County either as a cash contribution to the Affordable Housing Investment Fund or through the creation or preservation of committed affordable units (CAFs) at a specific project in the vicinity of the site. It will be up to the County Board to decide how to use the funds.

The developer will upgrade existing protected bike lanes on South Eads Street and 15th Street South to enhanced protected bike lanes along the project frontage and to the north and east of the site, including reconfiguration of the intersection of 15th Street S. and S. Eads Street as a protected intersection to enhance bicyclists safety. Three existing bus stops will be relocated and constructed as floating bus islands with a bus shelter and ADA accessible boarding area.

County advisory commissions, including the Planning Commission and its Long-Range Planning and Site Plan Review committees reviewed the proposed redevelopment between July and October 2019. The Planning Commission also hosted a community forum on the proposed redevelopment in July 2019. The project also was reviewed by the County’s Environment and Energy Conservation, Housing, Disability Advisory, Parks and Recreation and Transportation commissions.

Board Accepts Grant to Aid Those Impacted by HQ2

A federal grant will fund training, English language instruction and more for Arlington and Alexandria residents impacted by Amazon's HQ2.