The Arlington County Board today approved a contract for slightly more than $6.08 million with Nastos Construction Inc. to build a new Mosaic Park in the heart of Ballston. The project will be funded primarily through Arlington’s first Transfer of Development Rights (TDR) under the County’s Policy Guidance for TDRs.

“The community has waited a long time for an entirely re-imagined, expanded Mosaic Park,” Arlington County Board Chair Christian Dorsey said. “We all look forward to this park emerging as a public jewel at the confluence of the Ashton Heights, Ballston and Buckingham neighborhoods.”

The Board voted unanimously to approve the contract. To read the staff report, visit the County website. Scroll to Item No. 15 on the agenda for the Tuesday, Feb. 26, 2019 Recessed County Board Meeting.

The park will feature an interactive water feature running through the reimagined and enlarged community space, creative play spaces for children that include electronic play options (first of its kind in Arlington), and great spaces for people to gather and play. Largely native plantings will shade the park and enhance Arlington’s tree canopy. The EPIC (Environmental Passive Integrated Chamber) system, which uses subsurface stormwater for irrigation, will manage stormwater efficiently and effectively. 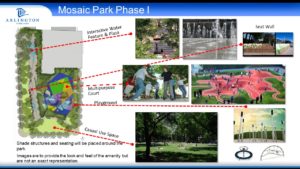 This project is the first phase of a planned two-phase park development.  The second phase is anticipated within the next decade.

In 2008, the County Board approved the initial Founders Square site plan, across North Quincy Street from Mosaic Park.  The Board then established a stakeholder team composed of representatives from the surrounding neighborhoods, Ballston-Virginia Square Partnership, various commissions and the Founders Square developer, which after a community process recommended proceeding with a density transfer in exchange for improvements to Mosaic Park.

A County-led public engagement process in 2008-2009 resulted in the Board approving the Mosaic Park Master Plan. The Board approved a Major Site Plan Amendment in 2011 and the transfer of density in exchange for improvements to Mosaic Park, valued at approximately $6.6 million. A team of stakeholders working with County staff designed the park. In 2014, the County acquired the final property needed for the project to move forward, and 2015, the Board approved  regulatory changes to facilitate park development.

The County initially put the project of out for bid in 2016. When those bids came in above budget, the County value-engineered the project, and slightly reduced the scope, ensuring that the project stayed within budget while maintaining the integrity of the design. The County informed the community of the changes in a May 2018 community meeting.

Part of the park is currently being used as the staging area for the redevelopment of nearby Ballston Quarter. That use is due to end in February 2019. Park constructions is slated to begin shortly thereafter. The project is expected to finish early in 2020.

More in County Board, Environment