The Arlington County Board today approved a two-phase plan to redevelop a portion of Crystal Square, in the heart of Crystal City.  The project will add 100,000 square feet of street-oriented retail businesses, including a new Alamo Drafthouse movie theater and a grocery store, to Crystal Drive, and upgrade an existing office building to “Class A” office space.

The JBGSmith project also will include a new two-story, stand-alone retail building, dubbed the “Corner Building,” at the northwest corner of Crystal Drive and 18th Street S. that will be built above a future eastern entrance to the Crystal City Metro Station, and will complement a planned public park.

“This project will enliven Crystal Drive with street-level retail. Where today, most of the retail is inward facing, these changes will bring more visual interest and energy to this increasingly dynamic neighborhood,” County Board Chair Katie Cristol said. “Today’s action also commits the developer to granting an easement for a public park. It is another step toward realizing the Crystal City Sector Plan’s vision of a Crystal City that is more vibrant, has a greater sense of place, and provides residents and the people who work there with more civic, cultural, community and recreational amenities.”

The Board voted unanimously to approve a rezoning and three site plan amendments for a portion of Crystal Square, a 15-acre mixed-use development that lies between 15th Street South, 18th Street South, Crystal Drive and US Route 1. Crystal Square’s 1.3 million square feet of office space and 155,000 square feet of retail space, most of it in the Crystal City Underground, and 387 apartment units, was completed in the late 1970s. The area is designated the “Central Business District” in the Crystal City Sector Plan. 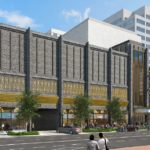 As part of the approval, owner and developer JBGSmith will dedicate a public park easement of no less than 43,900 square feet to the County along 18th Street South between Crystal Drive and South Bell Street. It is the largest open space easement in Crystal City since adoption of the 2010 Crystal City Sector Plan.

In the second phase of redevelopment, “Metro Market Square,” the existing, vacant office building at 1750/1770 Crystal Drive will be renovated and expanded, and the developer will make streetscape improvements recommended for the block by the Crystal City Sector Plan.  It is in this phase that the developer will dedicate the easement for the future public park to the County. The County will be responsible for planning, building and maintaining the park. The renovations will include architectural and façade improvements, and will add 10,000 square feet to the building. 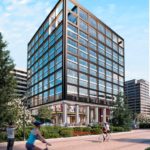 The Crystal City Metro Station elevators will be integrated into the planned two-story retail Corner Building. The Board approved a building envelope, specifying height and massing. The developer will submit the design for Site Plan Review Committee review and staff approval before obtaining a building permit.

The Crystal City Sector plan designates Crystal Square as part of Crystal City’s Central Business District. The sector plan was meant to respond to the Federal Base Realignment and Closure Act (BRAC) and post 9/11 security concerns, which led to an increase in Crystal City office vacancies as government agencies moved to more secure locations. The plan is meant to incent mixed-use redevelopment and add density, while enhancing the public realm and adding open space.

The plan envisioned whole-block redevelopments, but market conditions resulted in incremental redevelopment of individual sites instead. During their consideration of the Site Plan amendments, Board members expressed hope that the project will serve as a catalyst for more redevelopment in Crystal City.

The proposed redevelopment underwent a one-year public review process that included  four Site Plan Review Committee meetings, four Long Range Planning committee meetings and public hearings before the Transportation and Planning commissions. County staff also conducted an online survey on the nature of the proposed open space and the proposed two-story retail building adjacent to it. The proposed open space also will be subjected to a detailed park planning process in the future, to be led by the Department of Parks and Recreation.

More in County Board, Crystal City

Arlington County has accepted a grant from the federal government that will increase the number of Housing Choice Vouchers available...