The Arlington County Board today approved Virginia Hospital Center’s plan to expand its N. George Mason Drive campus onto the neighboring Edison site. The approval allows VHC to move forward with acquiring the Edison site from the County under the terms of a 2015 land purchase agreement between the hospital and the County.

VHC plans to build a new outpatient building and a parking garage on the 5.6-acre Edison site, which is bounded by N. George Mason Drive, 19th Street N., and N. Edison Street.

“Virginia Hospital is an integral part of this community, and its expansion will enable it to continue to provide medical care to our growing community,” Arlington County Board Chair Katie Cristol said. “Although this final design does not resolve all community concerns, the Board appreciated the changes realized in the design in recent weeks, consistent with our September guidance, to improve the physical buildings’ relationship to the surrounding neighborhoods.”

The Board voted 3 to 2 to approve a rezoning, site plan and use permit for the project. Board Members John Vihstadt and Erik Gutshall voted no, saying that the hospital could have done more to fulfill guidance the Board gave in September and to make design improvements sought by nearby neighbors. 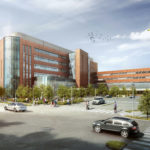 The Board deferred consideration of VHC’s plan at its September 22, 2018 meeting, asking that the hospital make specific design changes, including redesigning two proposed pedestrian connections within the site.

The revised design for the east-west connection through the site relocates the proposed sidewalk to the south side of the service drive, as requested in the motion. The sidewalk will be built along the existing Green Garage and the medical office building at 1715 N. George Mason Drive. Vertical mesh screens will be added to the garage façade along the path.

About the planned expansion

VHC plans to replace the existing Edison site buildings with a new seven-story outpatient building and a six-story parking garage. By moving existing outpatient uses to the Edison site, the hospital will free up its existing site for a planned 101-bed expansion of the hospital. 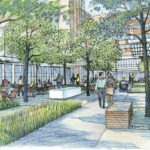 Learn more about the expansion plans and VHC’s land agreement with the County, and read the press release from the Board’s September 22, 2018 public hearing and deferral of VHC’s proposed expansion.

To read the staff report on this issue, visit the County website. Scroll to Item No. 33 A-C on the agenda for the Tuesday, Nov. 27, 2018 Recessed County Board Meeting.

In a separate action, the Board voted unanimously to accept $500,000 in funding from VHC for a pilot program aimed at diverting Arlington youth with behavioral health crises from hospitalization. VHC will pay $100,000 annually for five years for the pilot. Arlington County will absorb any ancillary costs. The funding will fund one licensed clinician who will provide crisis services, pre-screening and intensive care coordination.

“ Thanks to the hard work of our Community Services Board – citizens and staff – the County and Virginia Hospital Center are now positioned to partner to meet the critical needs of our young people in crisis,” Cristol said.

To read the staff report, visit the County website. Scroll to Item No. 34 on the agenda for the Tuesday, Nov. 27, 2018 Recessed County Board Meeting.

The money will be used to meet an emerging community need by providing services to children, youth and young adults up to age 22 in psychiatric crisis. 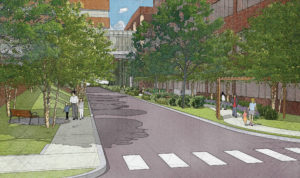 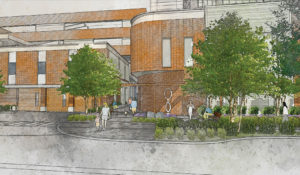