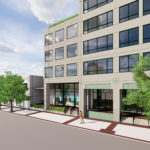 The Arlington County Board has approved WETA’s plan to expand its Shirlington headquarters and an incentive grant to will keep the public television station in Arlington for at least another 5 years.

“WETA was born in Arlington,” Arlington County Board Chair Libby Garvey said. “Its headquarters lies on Campbell Avenue, named for Elizabeth Campbell, an educator and activist who worked tirelessly to create a public television station here that was educational and good for children. She then guided it for four decades. WETA is a big part of Shirlington’s success and an important part of our community. I’m thrilled that this respected educational and cultural institution, and its 292 jobs, will be staying in Arlington for years to come.”

The Board voted unanimously to approve the expansion, the performance-based incentive grant, and purchase and lease-back agreement for WETA’s 27th Street S. studio site. To read the staff reports, see Items 55-57 on the agenda for the Saturday, July 18, 2020, Arlington County Board Meeting.

WETA, the non-profit local PBS station, will add a four-story studio and office building to its existing six-story headquarters at 3939 Campbell Avenue, opened in 1989. The addition, with its state-of-the-art television studio, will be built in a private courtyard between the existing building and WETA’s above-grade parking garage, connecting the two existing structures. A large media screen will be installed at the building’s ground level on S. Quincy Street.

The expansion will allow WETA to vacate its aging television studio on 27th Street S., which the County is purchasing for the expansion of Jennie Dean Park.

The Board approved a $2.27 million Economic Development Incentive (EDI) grant for WETA. Under the grant agreement, WETA is committed to retain its 292 jobs and more than 88,000 square feet of occupied commercial space in Shirlington for at least 15 years and to invest at least $15 million in constructing the new studio. The EDI grant is performance-based, with WETA eligible to receive up to $112,500 annually over 15 years if it meets the jobs and base facility targets. WETA must repay the grant if it does not reach its performance targets. Staff estimates that the 15-year net tax benefit for the County will be approximately $4.8 million. The Board also approved the purchase, for a price of $8 million of WETA’s 27th Street S., studio, and a lease-back agreement that will allow WETA to lease the studio for up to five years.

In another action benefiting the Village at Shirlington, the Board adopted the Shirlington Special General Land Use Plan Study Plus and Concept Plan and authorized advertisement of future land use amendments for the Village.  These actions were the outcome of a planning process initiated in response to GLUP amendment applications by Federal Realty Investment Trust and WETA to change the land use designation for their properties from “Low” to “Medium” Office-Apartment-Hotel. The plan, which was developed with broad community and stakeholder input, features a Vision and Guiding Principles to ensure the balance of the full range of community and County goals. The primary goals are to revitalize Shirlington while retaining its village character and Main Street identity.

“This study strikes the right balance in providing a vision and a framework for the redevelopment of Shirlington while allowing for some flexibility in the consideration of individual proposed plans,” Board Member Libby Garvey said. “I think we now have a blueprint for ensuring that Shirlington retains its walkable Main Street character while remaining competitive and continuing to thrive as an urban village.”

The Board voted unanimously to approve the GLUP Study Plus and Concept Plan and to advertise future land use plan amendments. To read the staff report, see Item 54 on the agenda for the Saturday, July 18, 2020 Regular Count Board Meeting.

The Board unanimously approved a request from Arlington Public Schools that the County temporarily allow teachers, staff, and visitors at Alice West Fleet Elementary School to park at the southwest corner of the school site, at the corner of 2nd Street South and South Old Glebe Road, for up to two years.

The additional parking will provide flexibility to support school operations and re-opening plans during the COVID-19 pandemic. The school’s original Use Permit closed the 23-space parking lot to parking once the school opened in September 2019. The school has experienced a shortage of parking for teachers and visitors since it opened. APS has agreed to conduct a parking utilization study in September 2021 and staff will review and analyze the results in January 2022.

To read the staff report, see Item 58 on the agenda for the Saturday, July 18, 2020, Regular County Board Meeting.

The Board unanimously approved the award of a contract to manage the construction of a second elevator at the Pentagon City Metrorail Station, and an interim agreement for a subsidiary of JBG to perform preliminary engineering on a new east entrance for the Crystal City Metrorail Station.

“The ongoing revitalization and redevelopment of Crystal City and Pentagon City will play a key role in Arlington’s emergence from the COVID-19 pandemic and our economic recovery,” Arlington County Board Chair Libby Garvey said. “These areas of the County will continue to grow, and they will need better expanded Metro service. These projects will improve capacity and functionality at two heavily used Metro stations and are timely and important.”

The Crystal City project will build a new station entrance on the northwest corner of 18th Street South and Crystal Drive that will create a direct ADA-accessible route for the many users who reach the station from the east. It will also provide better connections to high-capacity transit options east of the station and increase capacity at this heavily used station. Per the agreement, completion of the project’s 30% design is expected by May 2021.

To read the staff report, see Item 32 on the agenda for the Saturday, July 18, 2020, Regular County Board Meeting.

The Pentagon City project will add a second elevator at the Pentagon City Metro Station, where ridership is one of the highest among Northern Virginia stations. This station provides access to a broad array of retail, government and commercial office buildings and is a transfer point for regional and local transit buses and private bus services.

To read the staff report, see Item 33 on the agenda for the Saturday, July 18, 2020, Regular County Board Meeting.

More in County Board, Crystal City