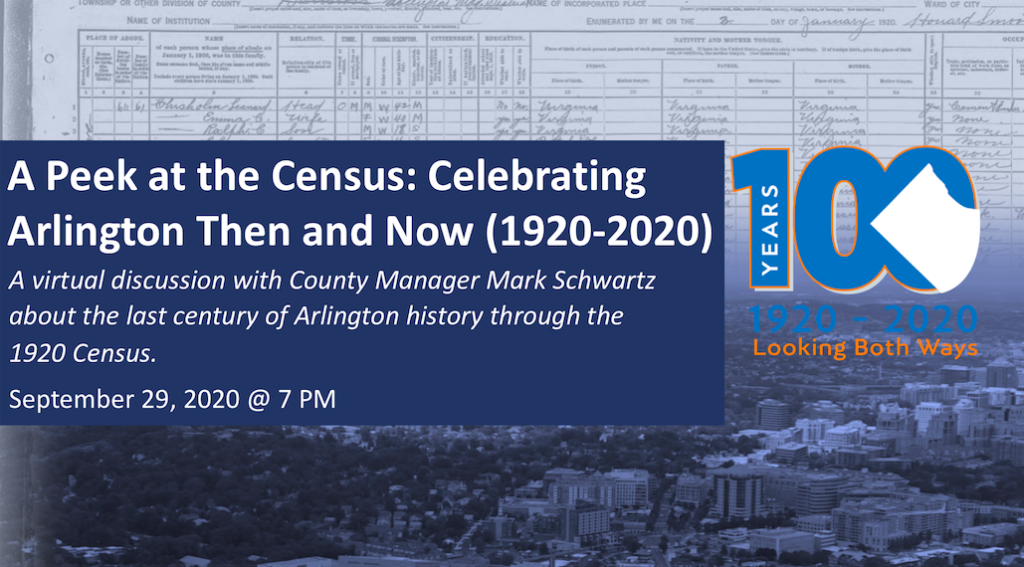 Join us on Tuesday, September 29 at 7 PM for a conversation about the last 100 years of Arlington history through the lens of the Census.

County Manager Mark Schwartz will be sharing insights from his extensive research into Census data from 1920 and reflecting on the many changes in the County over the last century. We will also be celebrating the work of Arlington’s Complete Count Committee, Census Partners & Champions, and community volunteers during this event.

Add the Virtual Session to your Google calendar

What the Census Tells Us About County History

Census data offer us valuable insights into many of the defining factors from the year a Census is taken. Though its questions change every 10 years, the Census reliably tells us key demographic details such as the age, race, and number of people in a household. Some years (but not in 2020) it ask questions about employment, highlighting the dramatic changes the County has experienced as it transitioned from rural to urban, and from a population of 16,040 in 1920 to the estimated 228,400 people who make Arlington their home today.

The reason we are able to access this Census data is due to the “72-year rule.” According to federal law, your Census responses will remain confidential for 72 years after they are collected. After this amount of time passes, the records are released to the National Archives and Records Administration for historical research purposes.

There’s Still Time to Get Counted

Arlington’s response rate is currently estimated at 98% – but this means there are still households in the County that need to be counted. Take some time before the end of the month to take the Census and ensure that you, your family, friends, and neighbors are all counted. Don’t miss out on being counted – the Census only happens every 10 years!

If you have already taken the Census, help spread the word and let everyone in your network know how important – and how easy – it is!