After months of opportunities for residents to respond online, by phone, or through the mail, Arlington County is committed to ensuring everyone in Arlington is counted in the 2020 Census. To achieve a complete count, Census Takers will begin conducting home interviews.

Starting the week of July 20 — nearly three weeks before the nationwide August 11 launch date — Census Takers will be visiting homes in Arlington, including an estimated 27,000 households that have not yet responded to the 2020 Census.

Participating in the U.S. Census is a constitutional right for everyone living in the United States. When everyone is counted, Arlington can receive millions of dollars in federal funding for important programs like free and reduced lunches, public transportation, affordable housing programs, emergency services and more. For every person not counted in the Census, our community loses out on our fair share of funding for these critical services.

What to Expect When a Census Taker Arrives

The Census Bureau is providing face masks to all Census Takers and requiring them to be worn on the job. The Census Taker will knock on the door or ring the bell, then step back to observe public health guidelines on social distancing.

All Census Takers speak English, and many are bilingual. If a Census Taker does not speak your language, you can ask for a return visit from one who does. Census takers can be easily identified as they will be carrying a government ID badge that includes their photograph, a U.S. Department of Commerce watermark and an expiration date.

Census Takers will only ask questions that are on the 2020 census questionnaire. The Census asks questions that include your name, race, country of origin, and who lives in your household. There is not a citizenship question on the 2020 Census form. Census takers will never ask for your social security number, money or donations, bank or credit card information, or about anything related to a political party. They will also never ask to come inside your home.

If no one is home when the Census Taker visits, look for a notice of their visit with information about how to respond online, by phone or by mail. 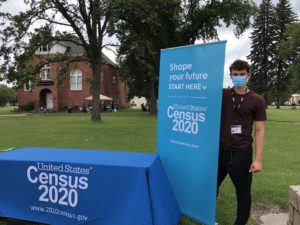 In an effort to increase self-responses before enumerators knock on doors, Census staff will also be out in the community with Mobile Questionnaire Assistance (MQA) at grocery stores, pharmacy entrances and other local areas where self-responses have been low. The Census Takers at MQA stations can help people complete the Census on their own mobile device or on a Census-provided tablet while practicing social distancing protocols.

MQA stations will be identifiable with banners with the official Census logo and will be available from mid-July to September 18. In addition, Census staff will leave flyers in doors in low response areas encouraging households to respond online, by phone or by mail.

It’s not too late to take the Census online, by phone or by mail!

Have you already taken the Census? Please let everyone in your network know how important – and how easy – it is! 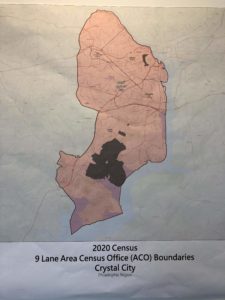 The Crystal City Area Office was selected along with 11 other areas across the country as part of a soft launch to get Census Takers out into the community. The Crystal City office was chosen in part because it was ready to begin operations and because it has access to enough personal protective equipment (PPE) to safely operate in our area. The opening of additional census offices will be announced gradually leading up to the August 11 official launch date for non-response follow-up.

Normally, non-response follow-up is scheduled for 12 weeks, but Census Takers are expected to finish up in our area in about 6 weeks. The shortened time frame will give the Census Bureau the flexibility to open some areas up later than August 11 if the coronavirus pandemic makes it impossible for them to start operations on time. All offices will conclude work no later than October 31, which is also the end of the self-response period.

The review will be led by two external experts and will be shared with a 15-member citizen group that will...