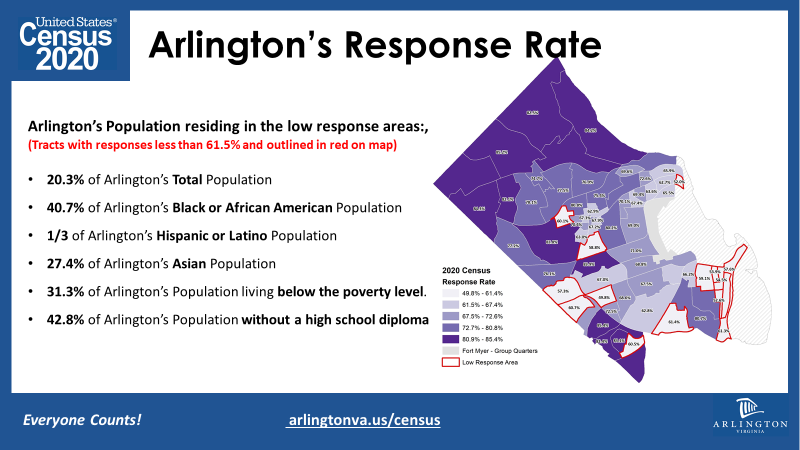 Over 68% of Arlington households have responded to the 2020 Census, but that leaves just over 31% – close to 30,000 households – that have not yet been counted, according to a presentation shared with the Arlington County Board.

The areas with the lowest response scores, as reported by the Census Bureau’s Response Rate Map, make up slightly more than 20% of Arlington’s total population, including 40.7% of Arlington’s Black or African American population, one-third of Arlington’s Hispanic or Latino population and 27.4% of Arlington’s Asian population. Also included are members of the community living below the poverty level, and those without a high school diploma. Apartments and condos make up 94% of housing in the low response tracts.

Arlington is planning a variety of outreach strategies to encourage everyone to be counted in the 2020 Census. This includes working with community leaders, including those active in non-profits, PTAs, civic associations, and faith communities, to address barriers to taking the Census such as language, digital access and concerns about confidentiality. In addition, yard signs and flyers with Census information in multiple languages will be posted and distributed in an effort to get the word out.

It’s important to get an accurate count to receive funding for programs and services that impact everyone in our community. Taking the Census is important, safe, confidential and easy. We encourage everyone who has not taken the Census to take 10 minutes and take it today! And if you have already taken it, please help us spread the word and encourage friends, relatives and other people in your network to take the Census. Everyone counts!

The U.S. Census counts every resident in the nation, including right here in Arlington County. As mandated by the U.S. Constitution, America gets just one chance each decade to count its population. The collected data help to determine things like the number of seats Virginia has in the House of Representatives, and how to distribute federal funds to local communities like ours.  Take the Census here.

Effective, Saturday, May 23, 2020, Arlington County will reopen its 148 parks for limited use in accordance with COVID-19 safety guidelines from the Virginia...