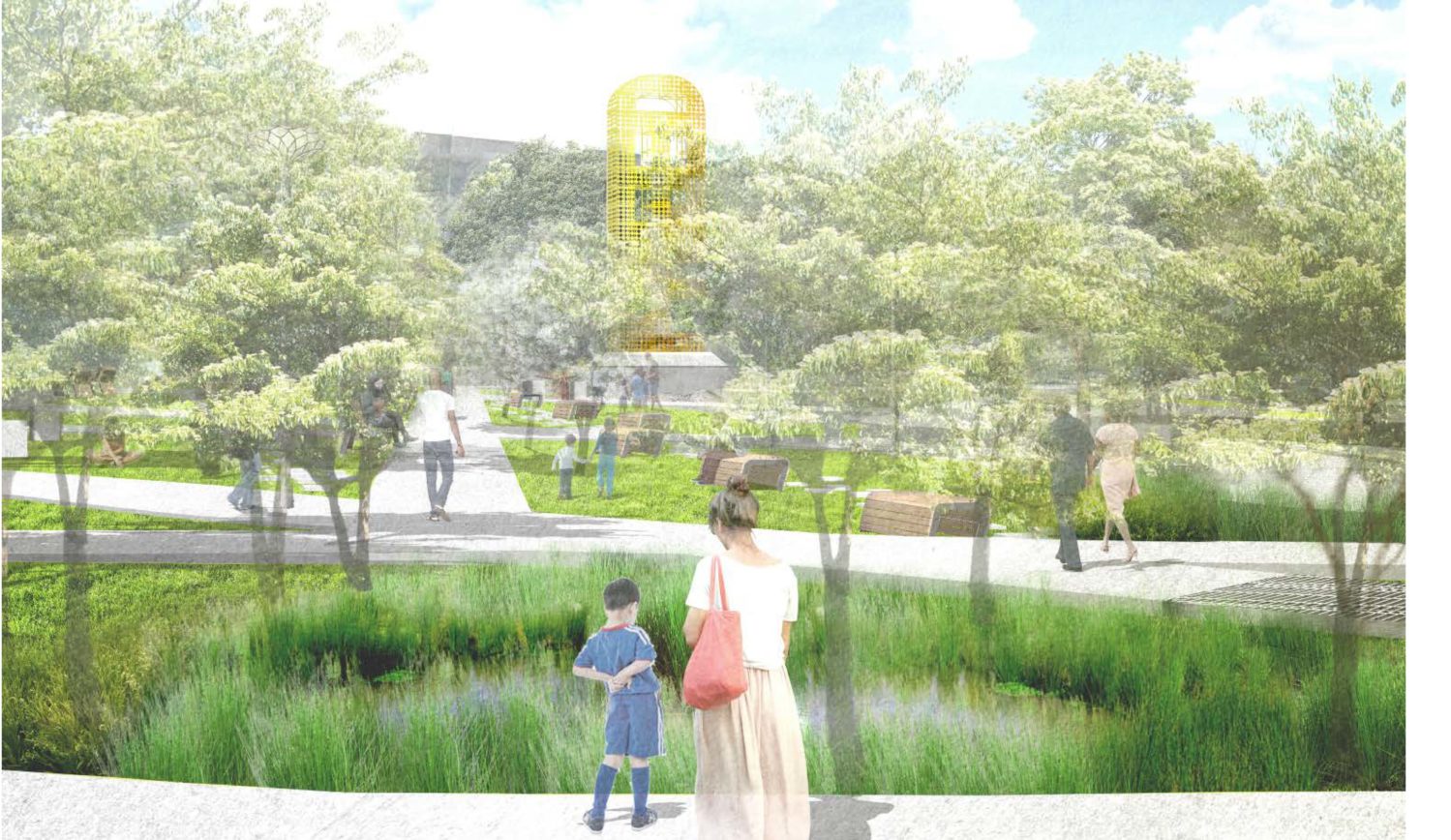 The County Board today approved a construction contract for the long-planned town square in the heart of the Green Valley (previously called Nauck) neighborhood. Nauck Town Square, which will be formally named in a later process, will be the anchor for the neighborhood and is part of the larger Four Mile Run Valley planning initiative.

The square will serve as a community gathering place for events and learning about the neighborhood’s rich cultural heritage, as expressed through design enhancements and public art by award-winning landscape architect and artist Walter Hood. The $4.85 million contract with Ardent Company, LLC includes:

“The Board’s action today is an important step toward realizing the community’s vision for a town square,” Arlington County Board Chair Christian Dorsey said. “Taking up an entire block between 24th Road South and South Shirlington Road, the square will anchor the Village Center envisioned in the 2004 Nauck Village Action Plan. It will serve as the neighborhood’s social and cultural center – a beautifully landscaped public place that will bring people together to enjoy events, learn about the neighborhood’s rich cultural heritage and enjoy public art. We look forward to construction beginning this summer.”

The County Board voted unanimously as part of the consent agenda to approve the contract. To read the staff report, go to the County website and scroll down to Item No. 22.

The County Board adopted the Nauck Village Center Action Plan on July 10, 2004, to guide public and private investment in the neighborhood’s commercial center. The Board also designated the Shirlington Road Corridor as a Special Revitalization District (SRD), which allows properties within the plan’s boundaries to receive special development incentives and regulations.

In 2013, Arlington Public Art was one of 59 grantees selected by the National Endowment for the Arts’ Our Town program and received funding to develop a public art project in the planned square.

Plan developed in collaboration with the community

Public engagement was central to the development of the square. Landscape architect and artist Walter Hood shaped the final design of the town square in a way that tells the story of the community and its heritage. Hood, whose work can be seen across the country and is the recipient of numerous awards, engaged Green Valley residents and community leaders in the process of designing the plaza and public art elements. Hood led a community kick-off in December 2015 and continued a series of meetings where the public had the opportunity to give input for the design of the town square.

The County Board approved the purchase of the last three properties needed to build the square in January 2017.

Construction is estimated to be complete in winter 2021.

Read more about the design and find all related resources on the Four Mile Run Valley project page.

More in Building & Construction, County Board

Concludes a land swap that provides public land and additional cash to the County and gives VHC room to grow and better serve the...