The Arlington County and Arlington Public Schools boards, collaborating to maximize the use of limited public land and leverage financial resources, will consider a license agreement that will allow the County to place a temporary fire station on the Wilson School site at 1601 Wilson Blvd.

Schools plans to build the County’s first-ever urban school campus on the site, which will be the new home to the H-B Woodlawn Secondary Program and Stratford Program. The new building will be part of a system-wide effort to meet the challenges posed by increasing enrollment.

The proposed licensing agreement would allow the County and Arlington Public Schools (APS) to pursue phased redevelopment of the site, while still ensuring that the school will open, as planned, in time for the start of the 2019-20 school year.

“We are trying to do a lot with this limited space in a key area of Rosslyn. This is a complex redevelopment effort, and all the parties involved must find creative solutions that work for our community,” County Board Chair Libby Garvey said. “The license agreement that both Boards will consider is the result of intense negotiations and close collaboration between the County, Arlington Public Schools, and our adjacent property owners.”

The agreement, if approved by both boards, would remove a major obstacle to redeveloping the adjacent Wilson Boulevard properties owned by the County and by Penzance, as envisioned in the Western Rosslyn Area Plan (WRAP). The two boards will consider the negotiated agreement at their meetings in July.

“We are committed to collaborating with our colleagues on the County Board to meet the needs of the entire community while ensuring that the new school at Wilson opens in September 2019,” said School Board Chair Nancy Van Doren.  “This agreement will save Arlington Public Schools approximately $5 million in direct project costs that can be used to meet our growing capacity elsewhere in the County.”  Van Doren concluded, “We appreciate that the County is making temporary parking and field space available for our students and staff at no cost until the entire project can be completed by 2022.”

Learn more about the APS plan to build a new school on the Wilson Boulevard site.

Numerous benefits to the community

The WRAP plan, adopted by the County Board in June 2015, envisions Penzance redeveloping the property it owns at 1555 Wilson Blvd., and the adjacent County-owned property, into two mixed-use buildings. In return for increased density, Penzance will pay all the costs to construct a new permanent Fire Station No. 10 in one of its buildings. Penzance also will provide 100 permanent parking spaces in its underground garage for the new school – saving APS the cost of building the 93-space parking garage it had planned to build for the new school.

Penzance also will build a new Rosslyn Highlands Park and will contribute to the County’s affordable housing fund, in addition to providing other benefits.to the public.

Penzance’s contributions, together with the School’s parking in Penzance’s planned garage, will save Schools a minimum of approximately $5 million in project costs, and the County $20 million through Penzance’s construction of the new fire station and new Rosslyn Highlands Park.

Highlights of the proposed License Agreement

The temporary fire station would be located on the northwest portion of the Wilson School site, at the corner of North Quinn Street and 18th Street North.

APS plans to open the new school by the start of the 2019-20 school year. Under the proposed agreement, the school, which is planned to be the new home for the H-B Woodlawn Secondary Program and the Stratford Program, would open on time, but without a field, because the temporary fire station would stand on the site of the planned field. The field would be built after the new Fire Station No. 10 is completed, and the temporary fire station is removed. The temporary fire station is expected to be removed no sooner than late 2020. The County will give APS access to off-site interim playing field space until the APS field is completed on the Wilson School site.

“We realize that opening the school without a field will inconvenience students and staff,” Garvey said. “We chose this site because the parking provided to APS for schools will save a considerable amount of money for the school project, and it is the best location by far for the temporary fire station. We believe that when the project is finally completed, this site will not only be a great new home for H-B and the Stratford Program, but will also provide many, many benefits to our community.”

The agreement will not impact the planning process for the new Rosslyn Highlands Park, including plans for joint use of the park with APS.

Both boards will consider approving the licensing agreement at their regular meetings in July. In addition, The Arlington County Board will consider approving a 75-year ground lease (with an option to renew for another 50 years) with Penzance for the County-owned land where Fire Station No. 10 now stands, and Rosslyn Highlands Park. The lease will enable Penzance to file a site plan to redevelop the property consistent with WRAP.

About the Wilson School Project

On Dec. 18, 2014, the School Board approved a new school to be built at the Wilson site, 1601 Wilson Blvd.  The school will include an estimated 775 seats for the H-B Woodlawn and Secondary, Stratford, ESOL/HILT and Asperger’s programs currently located in the Stratford facility on Vacation Lane.  The new building is slated to be completed for the start of school in September 2019.  More information about the Wilson School Project is available on the Arlington Public Schools website.

The County launched the Western Rosslyn Area Plan Study (WRAPS) in 2014 as a collaborative effort to create a vision and Area Plan for the Wilson School and surrounding sites which include Fire Station No. 10, a park, an office building, retail and affordable multi-family apartments.

The County recognized this was an essential site for Arlington and worked with the community and property owners to achieve a comprehensive solution. The result of this study was the Western Rosslyn Area Plan, which applies to the area bounded by Wilson Boulevard to the south, Quinn Street to the west, Key Boulevard and 18th Street to the north and the eastern boundary of the 1555 Wilson Blvd. property.

The community planning effort produced a vision of a mix of high quality civic uses, including a new school, a new fire station, a redeveloped Rosslyn Highlands Park and new residential and commercial redevelopment, which may include up to 250 affordable housing units.

A Board-appointed Working Group of Arlington residents, business leaders, property owners and advocates worked with the County’s planning staff over many months to develop the plan. The Arlington County Board adopted the Western Rosslyn Area Plan on July 21, 2015.

To learn more about WRAPS, visit the County website. 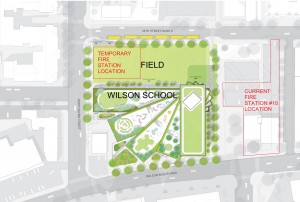 Katherine E. Young has been selected the first Poet Laureate of Arlington County, to be installed at a brief ceremony...