Meeting virtually to protect the health and safety of the public during the COVID-19 pandemic, the Arlington County Board today approved a plan to build a six-story assisted living facility on Lee Highway at its April 25, 2020, continued Regular County Board Meeting. The Board took action on dozens of other items, including:

The Board approved a plan for an assisted living facility, Artis Senior Living, at the intersection of Lee Highway and N. Taylor Street, in the Waverly Hills neighborhood. The six-story, 175-unit facility will include 80 units for memory care and 95 for assisted living, and a parking garage with 112 spaces. The project’s architecture will embrace biophilic principles, including bird-safe glass windows. The project will obtain LEED silver certification under the U.S. Green Building Council for sustainable design, construction materials, and energy efficiency.

Community benefits will include a 10,174-sq. ft. public open space on the southwest corner of the site that the developer will landscape with a lawn, flowering tree grove, benches, and rain garden, and maintain. A walking path through the public space will connect to Lee Highway and N. Taylor Street. The developer also will contribute $356,528 to the County’s Affordable Housing Investment Fund and will contribute to the County’s Utilities Underground Fund, and Public Art Fund. (Note: the affordable housing contribution was incorrect in the original version of this release. $356,528.00 is the correct amount).

“We know that Arlington needs more assisted living facilities to accommodate our growing number of residents who are seniors,” Arlington County Board Chair Libby Garvey said. “This project will provide much-needed quality assisted living for our seniors and new open space for the entire community.” 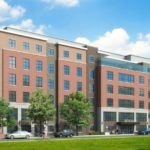 The Board voted 4-0 to approve a rezoning and the proposed Site Plan for the redevelopment. To read the staff report, scroll to Item No. 38 on the agenda for the Saturday, April 18, 2020, Regular Meeting.

The 2.79-acre site is currently comprised mostly of vacant lots and some vacant single-family homes. The new facility will be U-shaped, with two wings framing a private interior courtyard that will cover the parking deck. The building will include community rooms, medical, physical therapy and exercise rooms, locker rooms, kitchen and dining rooms, beauty salons, game and tv rooms, and three outdoor terraces for residents.

“This name both reflects the Crystal City BID’s much larger geographic boundaries and preserves the identities of the neighborhoods drawn into the BID,” County Board Chair Libby Garvey said.

The Board approved the BID’s expansion in September 2019, after more than 50 percent of the property owners within the new boundaries supported expanding the BID.   The new BID reflects how upcoming transportation, infrastructure, and planning projects will continue to increase connections among the three neighborhoods.

After the boundary expansion’s approval, the Crystal City BID led a robust outreach effort on renaming the BID that showed residents felt strongly that a new name should preserve the unique identities of each of the three neighborhoods included in the BID’s boundaries.  Marketing and branding, including signage and placemaking efforts,  will continue to promote the individual neighborhood names alongside the area-wide National Landing Brand.

The Board voted 4-0 to approve the new name for the BID. To read the staff report, scroll to Item No. 25 on the agenda for the Saturday, April 18, 2020, Regular Meeting.

The Board approved naming a new park after Selina Norris Gray, an enslaved woman who preserved Washington family heirlooms left behind in Arlington House by the fleeing Lee family during the Civil War.

“In naming this planned park for an enslaved African American woman who ensured that Washington family heirlooms survived the Civil War, the County is honoring an extraordinary woman, her family, and a dramatic incident in Arlington’s past,” Arlington County Board Chair Libby Garvey said.

The planned park will be built within the Trove (Wellington Apartments) Development at 1201 S. Ross St., south of Columbia Pike. It is near the house built by Selina Gray’s son, Harry Gray, in 1881 on S. Quinn Street. The Harry Gray House and its property is designated as a Local Historic District and listed on the National Register of Historic Places.

The Board approved a recommendation from the Park and Recreation Commission to name the .1-acre park “Selina Gray Square.” The park will lie at the north end of one of the three six-story residential buildings planned for the development, within the Columbia Heights Civic Association. Privately owned, the park will be accessible to the public and will have a bocce court, plaza, benches, walkways, and landscaping. The park will include a plaque to commemorate Gray. 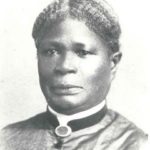 Selina Norris Gray was born into slavery at Arlington House, home to the Lee family. She served as Mary Custis Lee’s personal maid and eventually, head housekeeper. She and her husband reared eight children in Arlington House’s Southern Slave Quarters. In May 1861, Mary Custis Lee entrusted Gray with the Arlington House keys and asked that she preserve the Washington artifacts she was unable to remove as the family fled the house. Because of Gray’s courage, the artifacts exist today.

The Board approved a $1.33 million contract with Ardent Company LLC to improve pedestrian access and safety on both sides of 23rd Street South between South Eads Street and Richmond Highway, in Crystal City.

“This is the start of a two-phase project that will transform a key arterial road in the heart of Crystal City – just one of many exciting transportation projects that in the coming months and years will dramatically improve Crystal City’s road network and help make it even more walkable and vibrant urban village when we are once again more able to move freely along our streets,” County Board Chair Libby Garvey said.

The Crystal City Sector Plan, adopted by the County Board in 2010, lays out the long-range vision for redeveloping Crystal City as a more complete urban village, called for 23rd Street South to be reconfigured east of Richmond Highway as part of an extensive reconfiguration of the street and transportation network to make the neighborhood more pedestrian-friendly and functional for all who use its streets.

The Board voted 4 to 0 to approve the award of contract. To read the staff report, scroll to Item No. 28 on the agenda for the Saturday, April 18, Regular Meeting.

The Board approved two agreements with the federal government related to the Southern Expansion Project for Arlington National Cemetery.

The expansion will create much-needed burial space for the cemetery by creating a parcel of land south of the existing cemetery by closing, realigning, and relocating Arlington roadways.  The Board approved an agreement with the federal government endorsing the major design elements for the planned realignment of Columbia Pike, which the federal government will be paying for.

“The expansion of Arlington National Cemetery is an opportunity to better align Columbia Pike and increase its multimodal transportation capacity – especially with the addition of new bike trails,” County Board Chair Libby Garvey said. “Our partnership with the federal government is important to the County’s ongoing efforts to improve this vital corridor.”

The Board approved a second agreement that calls for Arlington to provide $500,000 for the federal government to design a multi-use trail along Washington Boulevard adjacent to the cemetery. This segment of the trail, adjacent to the cemetery, is an important connection from Columbia Pike Pentagon City to Memorial Drive. The agreement gives the Eastern Federal Lands Highway Division the authority to move forward with designing the trail.

The Board voted 4 to 0 to approve each of the agreements. To read the staff reports, scroll to Items No. 32 and 33 on the agenda for the Saturday, April 18, 2020, Regular County Board Meeting.

Arlington County invites the media to a briefing on Friday, Jan. 3, at 9 a.m. on new traffic patterns along...