The Arlington County Board today approved a plan to redevelop a 7.65-acre superblock located along the eastern boundary of Rosslyn’s core into three new blocks with a total of up to 2.5 million square feet of offices, residences, retail, a hotel and public open space. The redevelopment, a joint project of Vornado/Charles E. Smith and Gould Property Company, will occur in five phases over the next 25 years.

When built out, Rosslyn Plaza will be the largest single redevelopment in Rosslyn. It will offer five new buildings with commanding views across the Potomac River; major public street improvements including two new streets; portions of a planned, vehicle-free Esplanade that will front 1-66, and a new public park — all within walking distance of the Rosslyn Metro Station.

“Rosslyn Plaza is key to our vision of transforming Rosslyn into a more attractive, walkable and dynamic urban center.  This single development, in the heart of a neighborhood that is critical to the economic health of our community, will make Rosslyn an even better place to live, work and play and help attract new businesses and new residents.”

To read the staff report for this item, visit the County website. Scroll down to Item #23 on the Agenda for the Saturday, March 12 County Board Meeting.

The project re-envisions the site bounded by 19th Street North, North Kent Street, Wilson Boulevard and North Arlington Ridge Road. The first approved redevelopment since the Rosslyn Sector Plan was adopted in 2015, Rosslyn Plaza will bring a greater sense of place to Rosslyn’s core, and strengthen the connectivity of the street network.

Each of the five phases of the Phased Development Site Plan (PDSP) will go through the site plan process for public review, feedback and final approval by the County Board. Each phase will provide new buildings along with public improvements to the street network to transform the superblock into three new blocks.

In the third phase, Rosslyn Plaza Park, 0.81 acres of open space, will be built with flexible space for both active and passive recreation amenities. As outlined in the Rosslyn Sector Plan, the development’s building heights are guided by the “Peaks and Valleys” approach, which includes the preservation of priority views from the planned Central Place public observation deck and Freedom Park, as well as the contribution to a varied skyline. The phasing program outlined below describes maximum building sizes, which will be subject to final site plan approval and may not ultimately be as large as listed here:

The current Rosslyn Plaza development has seven buildings – four office buildings, two residential buildings and the Spectrum Theater. Built in the 1960s-70s, they are arranged on a superblock that is elevated and physically disconnected from Arlington Ridge Road. The redevelopment plan calls for replacing all of the aging buildings and creating a new destination that provides easy access for transit users, pedestrians, cyclists and motorists.

Superblocks, popular in the late 60s, are larger-than-normal city blocks favored at a time when planners sought to separate vehicle and pedestrian traffic. Superblocks often discourage walking and cycling. Under the redevelopment plan, the Rosslyn Plaza superblock will be broken up into three blocks with new two-way streets, running east-west. The streets will connect North Kent Street to North Arlington Ridge Road. A portion of the Esplanade, a 22-foot-wide landscaped, shared pedestrian and bicycle trail facing the Potomac River that was envisioned in the Rosslyn Sector Plan, will be built along the reconfigured Arlington Ridge Road.

During this period, the SPRC made suggestions to the developer to revise the Rosslyn Plaza redevelopment plan and integrate the recommendations from the Realize Rosslyn process and eventually from the adopted Rosslyn Sector Plan.

The Planning Commission recommended approval of the project at its meeting on March 3, 2016.

The County Board adopted the Rosslyn Sector Plan on July 23, 2015, a 25-year plan designed to transform Rosslyn into a more walkable, dynamic urban center and vibrant gateway to Arlington. The Plan provides both a vision and a guide to growth and development in the Rosslyn Coordinated Redevelopment District (RCRD). It was the first in-depth review of the Rosslyn area since the Rosslyn Station Area Plan Addendum was adopted in 1992.

Rosslyn is undergoing a major transformation with several site plan projects either under construction or preparing for future implementation.

Project at a glance 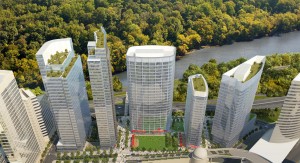 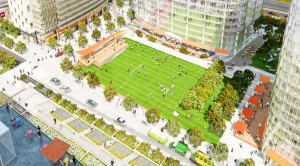 More in Business, County Board

The Board approved asphalt contracts totaling just under $11.6 million to help maintain Arlington’s 974 lane miles of streets. Since...