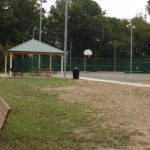 The Arlington County Board today approved the $1.404 million purchase of two south Arlington residential lots to expand Fort Scott Park, in the Arlington Ridge neighborhood. The two lots are next door to the park’s southern entrance.

“This is the first acquisition of parkland since the Board adopted the Public Spaces Master Plan update earlier this year,” Arlington County Board Chair Christian Dorsey said. “The PSMP provides a road map for the County’s strategic acquisition of parkland over the next decade to help meet the needs of our growing community for open space and recreational opportunities. These two properties were specifically identified for acquisition to expand this very popular park. We are fortunate that the owners have offered these properties to us, and that we have the resources to acquire them for future generations to enjoy.”

The Board voted unanimously to approve the acquisition. To read the staff report, visit the County website. Scroll to Item No. 47 on the agenda for the Saturday, July 13, 2019 Regular County Board Meeting.

The 2019 Public Spaces Master Plan calls for adding at least 30 acres of new public space over the next decade to help meet the needs of Arlington’s growing population. The two properties that the County plans to buy include a lot with a house at 705 31st Street South. and a vacant lot next door. The land is immediately adjacent to the park’s natural resource area and an informal footpath that connects the neighborhood to the park. The County plans to demolish the modest split-level house at 705 31st Street South.

Fort Scott Park, at 2800 Fort Scott Drive, has a large natural resource area with nature trails and paths. It has a picnic shelter; playground; diamond field; two lighted tennis courts; practice wall and a lighted basketball court. Its name derives from the civil war-era fort, named for then General-in-Chief of the Union Army General Winfield Scott, that was built on the site to guard Washington D.C.’s southern flank.

The Arlington County Board will consider and act on dozens of items at its July 2019 Board Meeting. The meeting...