The Arlington County Board today voted to approve redevelopment of 400 Army Navy Drive, replacing a 1967 office building with a 20-story residential building with two towers and 453 units.

“This project is in keeping with the comprehensive vision for Crystal City that the community crafted in the Crystal City Sector Plan,” said Arlington County Board Chair Mary Hynes. “It will bring new life and more housing into an Arlington neighborhood that we are working hard to reinvigorate with a better mix of uses, better transportation options, and more and better open space.”

The County Board voted unanimously to approve the site plan.

The 400 Army Navy Drive redevelopment proposal centers on a 20-story residential building, separated into two distinct towers, with a total of 453 multiple-family dwelling units. The redevelopment is guided by the standards set forth in the Crystal City Sector Plan,

The blueprint for the next generation of development in Crystal City that the County Board adopted in 2010.

400 Army Navy Drive is the third major site plan that’s been approved since the Board adopted the Sector Plan. The other two were 1720 S. Eads St. and 1900 Crystal Drive.

The proposed 400 Army Navy Drive development would replace the office building known as the “Paperclip Building” due to window patterns at the uppermost level. The existing building has been vacant due to the Base Realignment and Closure (BRAC) legislation. The 1.77 acre site is located within a half-mile of both the Pentagon and Pentagon City Metro Stations, and three-quarters of a mile from the Crystal City Metro Station, and has four bus stops within a block. The building will have one parking space per unit, located both below and above ground, and 182 bicycle spaces.

To read the staff report on this item, visit the County website. Scroll down to Item #33 on the Agenda for the January 24 Regular County Board Meeting. 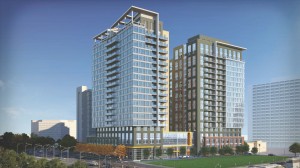 The Arlington County Board today adopted Revenue Sharing Principles for Public Education designed to meet the needs of Arlington Public...