Sections of the Washington & Old Dominion and Four Mile Run Trails in Arlington will have a detour in place as the County undertakes an emergency construction project along Four Mile Run, starting in mid-February.

A short trail detour will be in place, with clear directional signage along the route. 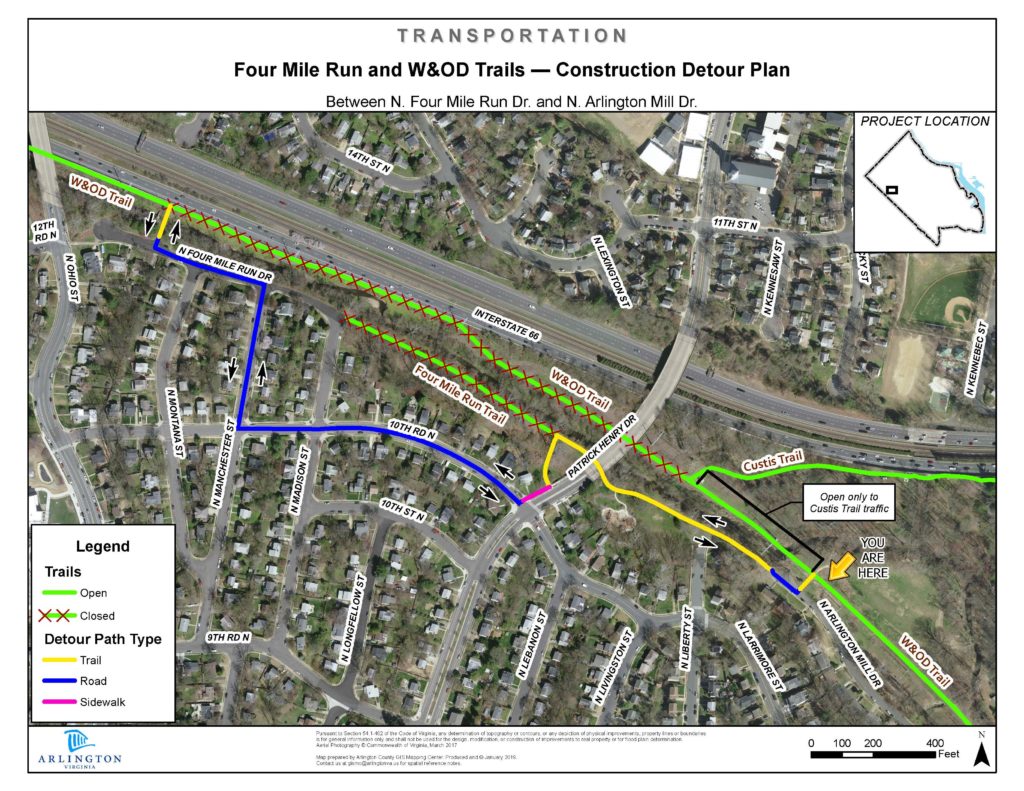 Tree impacts will be avoided as much as possible, but some will be pruned along the Four Mile Run trail, in the vicinity of the staging/access area. Stay up to date on this Four Mile Run Stream Repair by visiting the project page and following Arlington’s Department of Environmental Services on Twitter.

The Benjamin Banneker Park Project, which includes redesign of the segment of the Four Mile Run and W&OD multi-purpose trail that runs through the park, also features a W&OD Trail detour, but it is separate from the detour outlined here.

Arlington performed a County-wide stream assessment from 2011-2012, which looked closely at both physical stream and infrastructure conditions, with the goal of developing restoration priorities for specific stream systems. The result was a prioritized list of restoration projects as part of the Stormwater Master Plan.

During that assessment, this area of Four Mile Run was rated as Fair: ” … [A]bout 10 percent of the upper reaches of Four Mile Run were found to be in actively eroding condition, while many areas of the stream were beginning to naturally stabilize or had been artificially stabilized.” However, since that time, this isolated area has rapidly deteriorated. Following the completion of this short-term fix, the County will move a larger scale restoration project up the prioritization list.

The Stormwater Master Plan, adopted by the County Board in 2014, contains information on the condition of the County’s stormwater management systems, streams and watersheds, in addition to recommendations for improvements. Stream restoration projects identified in the Stormwater Master Plan that have recently been completed include Lower Four Mile Run in south Arlington (south of 395 to the Potomac) and the Windy Run watershed in north Arlington.

Arlington County Board Chair says Amazon's plans in Arlington have not changed.