“Jay has demonstrated a commitment to excellence during his more than two decades in Arlington,” said Donnellan. “He brings strong leadership skills, an outstanding professional background, and a true passion for connecting communities with law enforcement. He is the right man to lead the department into the future.”

Prior to joining the Arlington County Police Department, Chief Farr worked with the Naval Criminal Investigative Service where he conducted complex criminal investigations concerning fraud against the United States government. Chief Farr is also a U.S. Marine veteran, where he served with the Presidential helicopter unit.

“I am honored at the opportunity to lead this great department and will maintain an unwavering commitment to community policing,” said Chief Farr. “I strive to instill a sense of teamwork with our communities, officers and regional law enforcement partners.”

Chief Farr earned his Bachelor’s and Master’s degrees from George Mason University and he has undertaken study in a number of educational programs, including Naval Postgraduate School Center for Homeland Defense and Security, FBI National Academy, and Senior Institute for Police Management–Boston College in conjunction with John F. Kennedy School of Business Management, Harvard University. Additionally, Chief Farr is enrolled in the Certified Public Manager’s program at George Mason University. He is a graduate of Leadership Arlington.

Currently, Chief Farr is an Adjunct Professor at George Mason University, where he teaches a curriculum of criminal justice and emergency management for law enforcement; he also teaches at University of Phoenix. 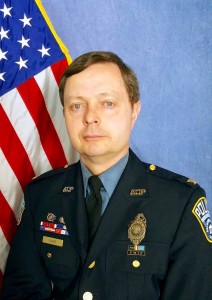 May 2015 County Board Meeting Agenda Highlights

The County Board will meet Saturday, May 16, and Tuesday, May 19.