Arlington, Va. – The Super Bowl is America’s most watched national sporting event. On Super Bowl Sunday, February 5, there will be lots of game day socializing that may include drinking. That’s why the National Highway Traffic Safety Administration (NHTSA) and the Arlington County Police Department are urging football fans to choose sides now: drinking OR driving. If you plan on drinking on Super Bowl Sunday, designate a sober driver to get you home safely.

NHTSA’s Fans Don’t Let Fans Drive Drunk campaign encourages people to make plans ahead of time that will prevent them from getting behind the wheel of a vehicle after drinking. Driving impaired could result in injury or death for you or others on the road. That’s why the Arlington County Police are increasing saturation patrols on Super Bowl Sunday to keep our roads safe from impaired drivers.

According to data from NHTSA, in 2015 there were 10,265 people killed in alcohol-impaired-driving crashes in the United States—29 percent of all crash fatalities in the nation. A driver is considered alcohol-impaired with a blood alcohol concentration (BAC) of .08 or higher, the legal limit in all states. This February 5, don’t become a tragic Super Bowl statistic.

For those who plan to drink, leave your keys at home. Designate a sober driver, whether it’s a friend, relative, taxi, ride sharing or public transportation. For those who plan to drive, refrain from any alcohol. Instead, enjoy the game with food and non-alcoholic drinks. Being a sober, designated driver is a key role on Super Bowl Sunday. You might just save a life. 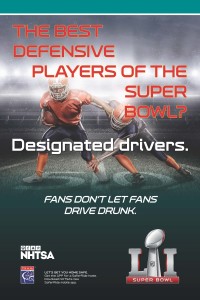 The Sheriff's Office receives a score of 99.4 percent from the American Correctional Association Commission, whose standards are the national...