This spring, the Arlington Electoral Board, with support from the Arlington Artist Alliance and Arlington Public Libraries, conducted the County’s first-ever “I Voted” Sticker Design Contest.

Following a thorough recount and audit, “Shout It From the Skyline” edged “Voting, the Language of Arlington’s Diversity” by just two votes. Further evidence that every vote really does count.

John Musco’s “Shout it From the Skyline” design will be available as Arlington’s new “I Voted” sticker at polling places in the County starting November 5, 2019. 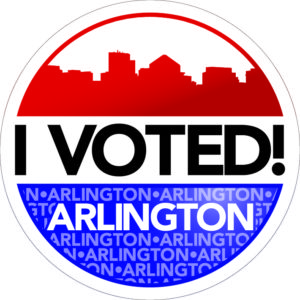 And since the vote was so close, Anna Radjou’s “Voting, the Language of Arlington’s Diversity” design will be available for absentee voting. 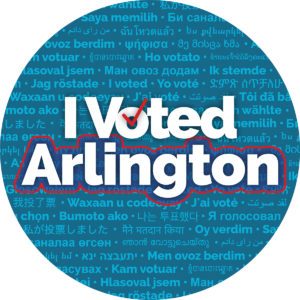 Those who vote at the polls in November will get the “Skyline” sticker, while those who vote in-person absentee, which begins September 20, 2019, will have their choice. The winning design sticker will also be used throughout Arlington Votes projects and outreach campaigns.

Furthermore, as an honorable mention, Arlington first-grader Mira Shomali’s design, “The Arlington Stars and Stripes,” will also be adapted as the County’s new Future Voter sticker, which is available for children accompanying their parents to vote. 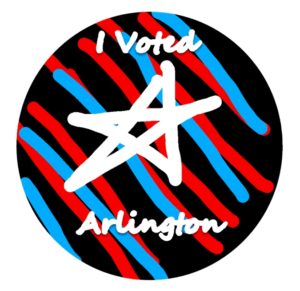 After receiving 29 submissions, a five-member panel of judges from the Electoral Board and Artist Alliance selected the five finalists: 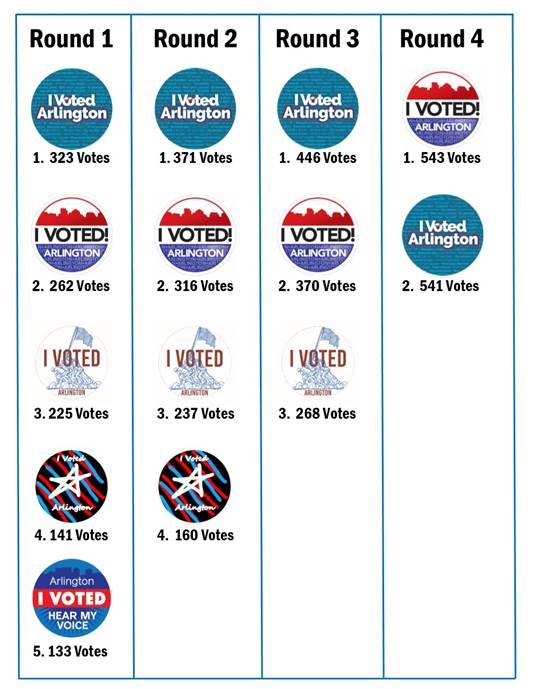 The public was then invited to vote on the five sticker designs. Using a concept called ranked choice voting (RCV), each voter was asked to rank their preferences; the winner was the first to achieve more than 50% of the total votes cast. If no entry totaled 50% in the first round, the choice with the fewest votes was eliminated, and the votes for that design were redistributed based on voters’ second choices.

Following the first round, the 133 votes that originally selected “Hear My Voice” were redistributed among the other four designs, based on which sticker those voters ranked second. Since no submission broke the 50% mark in the second or third rounds, the voting continued into a fourth and final round.

Winners were recognized at the County Board Recessed Meeting on May 21, 2019.

The next General Election is November 5, 2019. On the ballot will be all Virginia General Assembly offices (Virginia Senate and House of Delegates), Commonwealth’s Attorney, Sheriff, Commissioner of Revenue, Treasurer, County Board (two seats), and School Board.

On June 11, 2019, there will be Democratic Primaries for Senate of Virginia, 31st District; Virginia House of Delegates, 49th District; and Commonwealth’s Attorney.

Visit the Voting & Elections page for more information on how to register and where to vote.

Pet Therapy for Inmates? Arlington is Trying It.

Five furry four-legged visitors were the latest creative approach by the Arlington County Sheriff’s Office to reduce reoffending among inmates.