For the third year in a row, Arlington has received national recognition for its protections of lesbian, gay, bisexual, transgender and queer community members.

The County scored 92 out of 100 on the Municipal Equality Index (MEI), a rating system developed by the Human Rights Campaign, the country’s largest LGBTQ-rights group. And, because it scored at least an 85 despite being in a state without supportive state-level LGBTQ protections, the County also earned “all-star” recognition.

“Inclusion and diversity are core values for Arlington County,” Board Chair Katie Cristol said. “We hope this recognition signals the important role that LGBTQ community members and leaders play here, and Arlington’s ongoing commitment to being a welcoming place for all.” 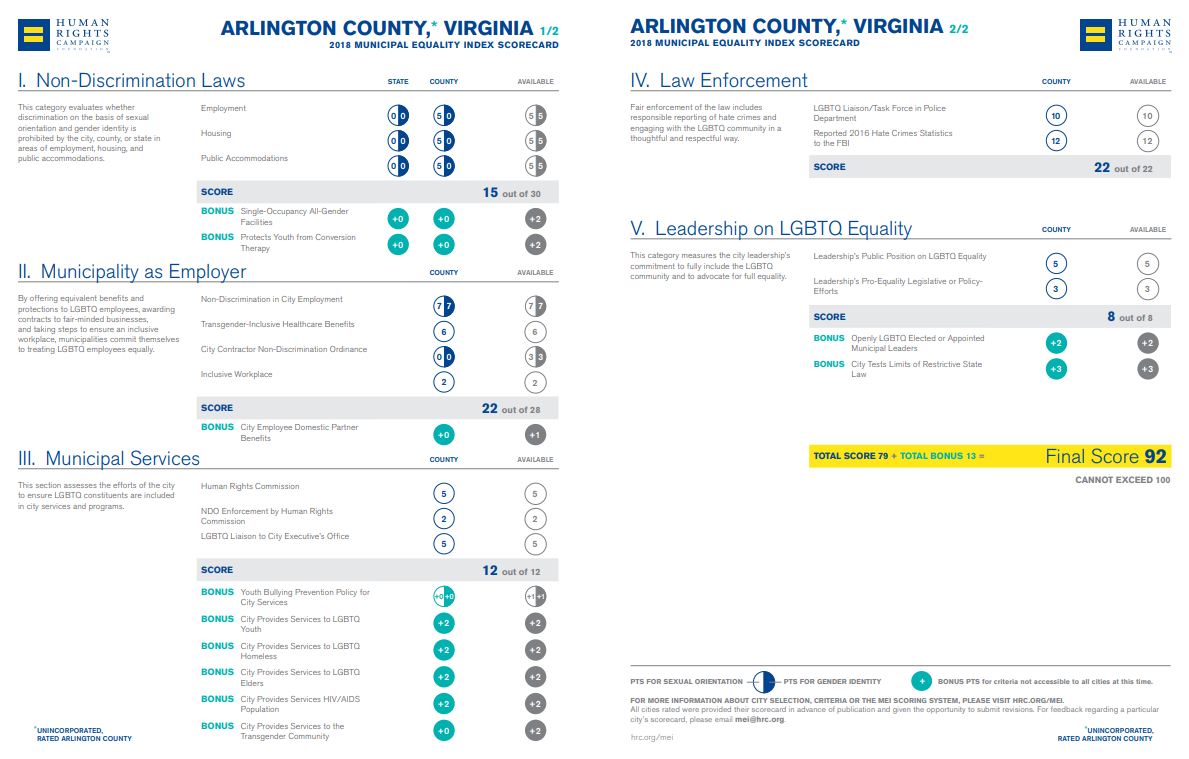 A lot goes into the annual MEI score. HRC breaks it down into five categories: non-discrimination laws; benefits and protections for municipal employees; municipal services for the LGBTQ community; law enforcement; and leadership on LGBTQ equality.

Arlington received perfect scores in the last three categories, including for specific initiatives like having a dedicated Human Rights Commission and LGBTQ liaison, having an LGBTQ task force in its police department and taking a public pro-equality position.

The County also received full points for its laws barring discrimination in employment, housing and public accommodations based on sexual orientation, and for providing LGBTQ protections and transgender-inclusive healthcare benefits for County employees.

Arlington picked up several bonus points, too — something HRC offers to help localities in states with restrictive state law. In Arlington’s case, Virginia lacks inclusive statewide LGBTQ protections, and the Dillon Rule prevents localities from acting on issues in which authority has not been explicitly granted by the General Assembly.

To help the County further align its policies and services with the MEI, Arlington’s Human Rights Commission established an Equality Task Force in late 2017.

Earlier this year, the task force established two new resources on the County website. One provides Arlingtonians with quick access to local, state and national LGBTQ resources. The other houses the task force’s progress reports and HRC-sponsored outreach events.

The Equality Task Force also recommended to the County Board three new or modified LGBTQ-inclusive policies or ordinances. Those policies and ordinances are currently being developed and reviewed before being considered for adoption.

Diversity and inclusion are at the heart of Arlington’s vision. Learn more about what Arlington’s Human Rights Commission and Equality Task Force are doing to help make Arlington more diverse and inclusive. And visit the County’s LGBTQIA+ Resources page.

Find out who they are and how they’ve helped make Arlington more diverse and inclusive.