The author, Jake Smith, is a graduating Yorktown High School student who has been working on the County’s roadway engineering design team since his sophomore year. Learn more about Jake below.

If you walk or drive in Arlington, you’ve probably already seen a Rectangular Rapid Flashing Beacon (commonly abbreviated RRFB) at a crosswalk near you. An RRFB is a set of high-intensity yellow lights, mounted below the pedestrian warning sign, adjacent to a crosswalk. When a person on foot approaches the crosswalk, he or she presses an accessible button which activates multiple sets of yellow flashing lights and quickly signals to drivers that they must yield to the crossing pedestrian.

Where does Arlington have RRFBs?

As a complete streets leader, Arlington installed its first two RRFBs about five years ago to pilot this new innovative technology. At that point, RRFBs were just gaining traction and approval across the country. In fact, the RRFB at the W&OD trail crossing at Shirlington Road is featured in the Federal Highway Administration’s guidance on how to correctly design and install an RRFB. In the summer of 2018, the County completed its tenth RRFB project, installing two sets of beacons at Columbia Pike and South Oakland Street.

The 10 RRFBs existed in entirely different surroundings and were dispersed around the County. Some were installed on roads with low vehicle traffic and speeds but high pedestrian volume, like the one at North Harrison Street near the Lee-Harrison Shopping Center. Others, like the one at North Sycamore Street and 17th Street North, has a crosswalk spanning four lanes and a median, with higher speeds and more vehicle traffic. County staff evaluated how the beacons were performing and determined in which locations they were most effective in increasing crossing safety. 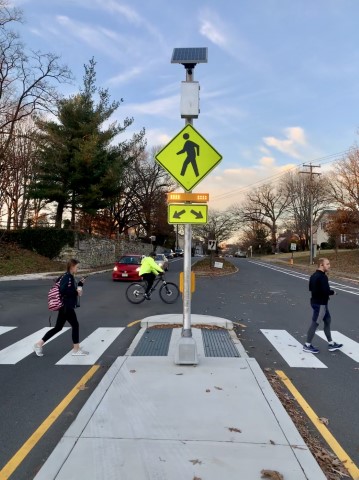 How does Arlington decide where to install RRFBs?

To understand which locations work best for RRFBs, County staff conducted on-site analysis at each of the 10 existing beacon locations, measuring:

The site observations also considered factors like speed limit, number of lanes and other context-sensitive information.

The study helped determine context-driven and mathematical trends to predict which locations RRFBs would be most effective in increasing vehicle yield rates and reducing vehicle speeds. Using this data (as well as information from other jurisdictions) as guidance, the County now have 20 additional RRFB locations in the pipeline, with the construction of the first three completed as of spring 2019.

The first new RRFB to be installed after the County completed its study is located on South Arlington Mill Drive at a crosswalk near Shirlington Park and the entrance to the Windgate community. At this location, Arlington Mill Drive is three lanes wide, and carries 12,000 vehicles per day with a posted speed limit of 30 mph.

Arlington County’s Marked Crosswalk Guidelines indicate that the minimum treatment for a crosswalk on that type of road includes painted yield lines and upgraded signage-tools that have been in place for years at the crossing. Still, advocates from the Shirlington Civic Association repeatedly noted that the crossing was difficult for pedestrians to safely use and the County’s speed data substantiated that most passing vehicles were unsafely speeding.

When funding became available as part of the site plan conditions for a nearby development, the County was able to complete the engineering and construction of the project. Seven of the 20 RRFBs currently in the pipeline are being funded using a similar development-driven process.

The RRFB located on Lee Highway at North Kenmore Street falls under the jurisdiction of the Virginia Department of Transportation (VDOT). Lee Highway is five lanes wide at this location, and carries 23,000 vehicles per day with a speed limit of 35 mph. Both the County’s and VDOT’s standards indicate that an unimproved crosswalk in a location like this would be unacceptable and unsafe, so there was a clear case for improvements to be made.

As part of nearby work, VDOT was able to upgrade the crosswalk markings, and agreed to fund the construction of an RRFB and upgraded signage at the site. The County then carried out the design and engineering and managed the project’s construction.

VDOT has funded five additional RRFBs within the County as part of its statewide Pedestrian Safety Action Plan. To receive this funding, Arlington County staff proposed pedestrian safety projects which were scored against projects from around the state. All of Arlington’s proposed RRFBs under VDOT’s 2018 program were funded and will be built out before the end of 2019.

RRFBs play an important part in the County’s push towards systemic safety. As the County works to prevent pedestrian collisions, it is critical that we find new and innovative ways to increase pedestrian safety. Comprehensive data analysis on RRFBs has helped the County identify what areas and type of roadways are most helped by RRFBs. As Arlington ramps up the countywide deployment of RRFBs to dozens of new locations, this data-driven approach helps to optimize resources to help improve the safety of Arlington’s transportation network. 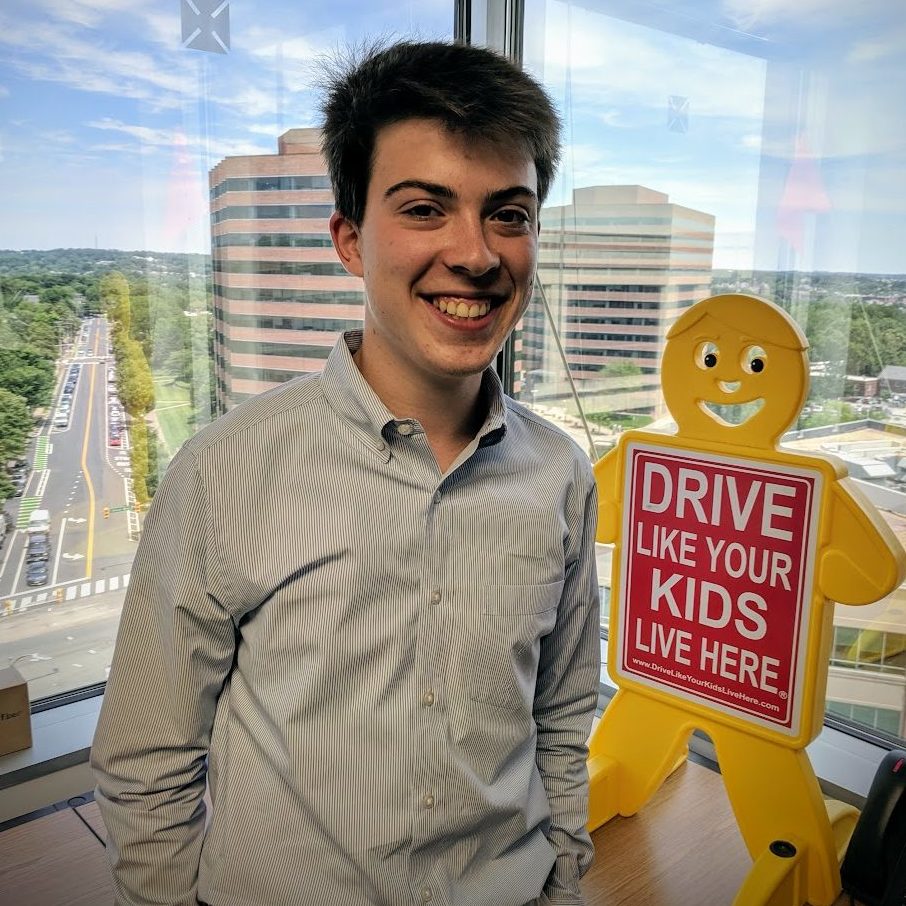 About the Author: Jake Smith

Learning to drive is a teen right of passage. For Jake Smith, it was also perfect complement to his work on Arlington’s roadway engineering design team. Smith graduates this month from Yorktown High School while wrapping up an extensive — and youthful — internship with the Department of Environmental Services.

The position, initially limited to the summer before his sophomore year, provided an up-close look at street systems along with the community initiatives that shape them. Smith returned to DES toward the end of junior year, working on data analysis and systemic safety programs aimed at preventing crashes before they can happen. Arlington Public Schools helped him carry a challenging County workload by granting a part-time class attendance waiver senior year.

Smith, 18, heads to Pittsburgh’s Carnegie Mellon University in August to study engineering and public policy. He deferred attending by a year to learn more from DES mentors, whom he credits with helping refine the interests of an “infrastructure nerd” in his first professional environment.

Looking back — and ahead — Smith says he now feels “much more connected with the Arlington community. To see grassroots efforts turned into successful design projects, it’s been an incredible initial exposure.”

Smith wrote the above overview of Rectangular Rapid Flash Beacons based on one of his last projects with the County.

More Than Just a Nurse

Gladys "Gigi" Bate was recently honored by the Arlington County Board with an ACES award for outstanding service to the...