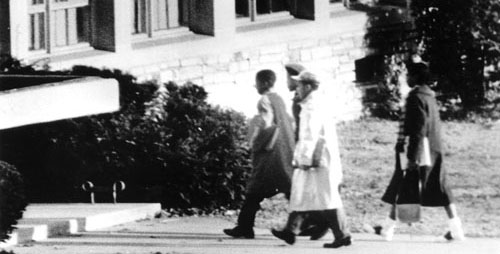 On February 2, 1959, four African American seventh-graders enrolled at Stratford Junior High School, marking the beginning of the end of the Commonwealth of Virginia’s practice of public school segregation. Sixty years later, on February 4, the public is invited to join some of the original integrating students at a special tribute to this milestone anniversary of Arlington Public Schools integration. The event, hosted by the Arlington County Historic Preservation Program and Arlington Public Schools, will feature the original integrating students sharing their experiences and a keynote address from County Board Chair Christian Dorsey.

The community can begin the evening viewing a Desegregation of Arlington Public Schools (DAPS) exhibit by the Center for Local History in the Auditorium lobby as well as audio of oral histories from some of the original integrating students. In addition, Arlington Public Art will be distributing free 60th anniversary commemorative letterpress prints by visiting artist Amos Kennedy. Arlingtonian Wilma Jones, author of My Halls Hill Family, will sign books for purchase.

The program will be followed by light refreshments.

Sixty years ago, the original integrating students – Ronald Deskins, Michael Jones, Gloria Thompson and Lance Newman (who passed away in fall 2018), walked into the previously all-white Stratford Junior High School, passing a battalion of helmeted police officers protecting the perimeter of the school grounds. Three of those students returned to the Stratford Building on Feb. 2, 2016 to be honored at a Back to Stratford event recognizing them and the community effort that helped bring about integration. See video and a photo gallery of the event here. Today, the Stratford building is the home of the H-B Woodlawn and Stratford Secondary Programs, and next fall the facility will be the home of Arlington’s newest middle school and will be called the Dorothy Hamm Middle School, in honor of one of our community leaders who worked tirelessly for Arlington to become the first school to be integrated in the Commonwealth of Virginia.

Arlington Public Art is collaborating with the County’s Historic Preservation program to commemorate Arlington’s civil rights history. Together we are working with printer, book artist and papermaker, Amos Kennedy.

There are two approaching anniversaries that are meaningful to Arlington’s history: the 60th anniversary of the desegregation of Stratford Junior High School (February 2019); and the 60th anniversary (June 2020) of the Sit-Ins in Arlington. Working with visiting artist Amos Kennedy, we seek to bring attention to the places and events that are often overlooked in our collective memory of Arlington.

Amos creates prints, posters and postcards from handset wood and metal type, oil-based inks, and eco-friendly chipboard. Much of his work is inspired by proverbs, sayings, and quotes that are significant to the place he is working.

The County Board directed the County Manager to rescind Residential Permit Parking restrictions on some streets in Arlington Mill/Forest Glen.