The Arlington County Board today voted unanimously to accept state funding that will help pay for additional staff needed to process an expected flood of new applications for Medicaid under the state’s expanded program, Cover Virginia.

The Board authorized the County Manager to accept $277,057 in state funding, money that will fund ongoing staff and operations in the County’s Department of Human Services associated with determining eligibility.

“The state’s Medicaid expansion program is good news for the thousands of Arlingtonians who will now qualify and gain health care coverage,” County Board Chair Katie Cristol said. “Under the expanded program, we expect 3,000 more County residents will qualify. Childless low-income adults with no disabilities, a group previously excluded, and families and persons with disabilities whose income previously was not considered to be low enough to qualify will now be eligible for coverage.”

In the coming months, the state will automatically enroll those now covered under the Governor’s Access Plan, who meet residency requirements, and Plan First, a state family planning program, with their coverage beginning in November 2018.

The County expects to begin processing new applications in November and anticipates some 7,000 new Medicaid applications. Of those, about 3,000 are expected to qualify. Currently, about 12,500 households, representing about 18,400 persons, are enrolled in Arlington in one of Virginia’s two medical assistance programs: Medicaid or the Family Access to Medical Insurance Security Plan.

The state funding will be used to hire six new County employees to determine eligibility. Ongoing net cost to the County for the expansion will be nearly $250,000 annually.

To fund Medicaid expansion, the state is reducing its Department of Behavioral and Developmental Services funding to localities across the state. Arlington’s FY 2019 allocation has been reduced by $0.6 million. Our reduction for FY2020 is expected to be $1.6 million. Some of that reduction will be offset by increases in revenue from Medicaid billing, although that is difficult to estimate until the County has more experience with Medicaid expansion.

To learn more, visit the County website. Scroll to Item No. 46 on the agenda for the September 2018 Regular County Board Meeting. 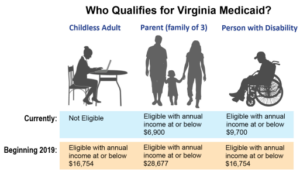 More in County Board, Human Services

The Arlington County Board will consider dozens of items at its September 2018 Meeting. Here are some of the highlights