A new area plan is in place to guide the future of Arlington’s Four Mile Run Valley, home to some of the last land in the County zoned for industrial use.

The plan adopts a “retention and adaptive reuse” approach that aims to preserve and enhance the area’s natural resources and open spaces while supporting future development that is consistent with the area’s industrial character and cultural heritage.

Policy directives and design guidelines outlined in the plan aim to achieve a number of common goals:

The County Board adopted the plan on Nov. 17 after more than two years of work by County staff, a citizen-led working group and the nearby community. Together with a Park Master Plan adopted in September, the plan spells out a unified, community-supported vision for the future.

Why was a plan necessary?

The 95-acre Four Mile Run Valley is located between the Nauck Revitalization District, where new mixed-use development is planned around a Town Square, and Shirlington Village, which has grown from a neighborhood shopping strip to a major mixed-use hub with housing, office, retail, arts and civic uses, as well as a Bus Transit Center. 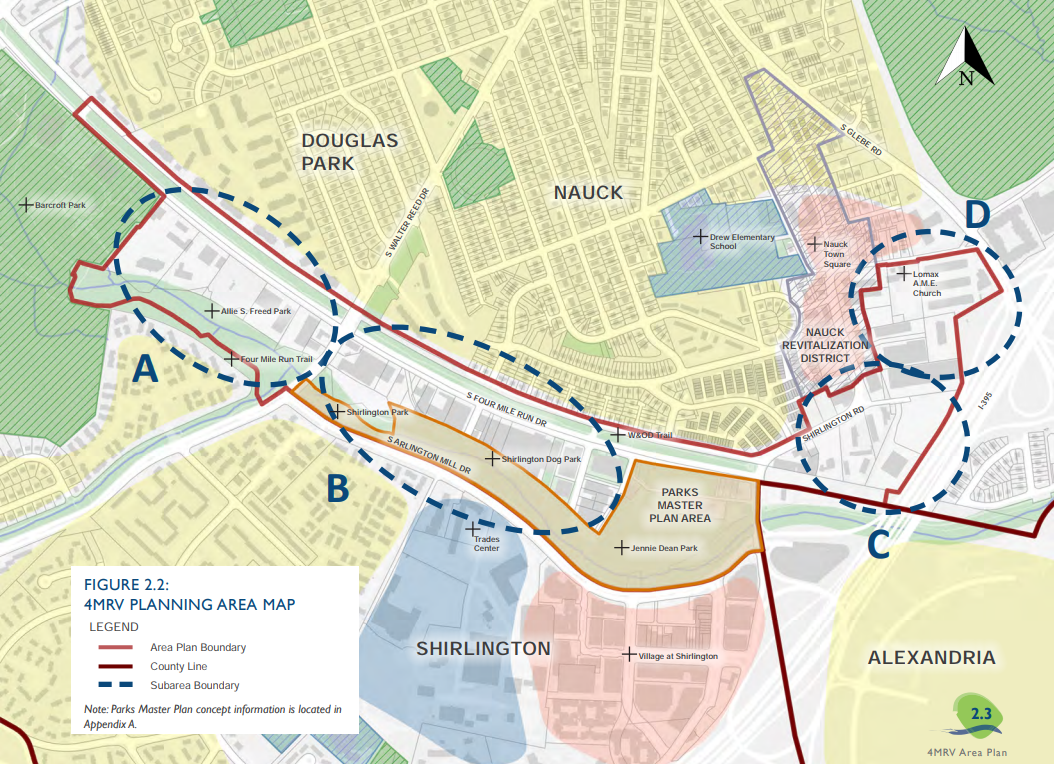 Over time, businesses in the 4MRV area have shifted from industrial to service commercial uses, and the most recent new developments include public storage and a small brewery, which were approved by-right under existing zoning.

In the absence of planning guidance for this area, piecemeal development was likely to continue. Development of an Area Plan provided an opportunity for community dialogue about the future of the area, considering the built and natural environments, potential future public and private investments, and how those elements would work together.

Plan developed in collaboration with the community

Public engagement was central to the development of the plan. Staff employed all four levels of engagement identified in the County’s new Six-Step Public Engagement Guide — communicate, consult, involve and collaborate.

From the beginning of the process, public engagement included bi-monthly meetings with the Board-appointed Four Mile Run Valley Working Group, which included representatives from the three neighboring civic associations, property and business owners, area non-profit organizations, advisory boards and commissions. The group met more than 30 times to review and comment on staff and consultant analysis, preliminary concepts and a draft Policy Framework, a draft Park Master Plan and the draft Area Plan.

Staff also held a community forum, a community open house and numerous check-ins and review sessions with the nearby civic associations — Nauck, Shirlington and Douglas Park. The County Board held two work sessions as the planning effort progressed, one in May 2017 and another in February 2018.

As the County worked on its plan for the broader Four Mile Run Valley area, it also developed concepts for the future of the area’s three parks — Jennie Dean Park, Shirlington Park and Shirlington Dog Park. The Board adopted a Park Master Plan for the three facilities at its September 2018 meeting.

Among other things, the Park Master Plan identifies replacement and realignment (exclusively for park purposes) of existing park features and the addition of new park amenities to meet the growing demand for active recreation, cultural resources and natural resource preservation. It also details the placement, orientation, materials and programming of open space and park amenities. And it makes recommendations for park area circulation, multimodal transportation and parking needs, environmental considerations, cultural amenities and opportunities to re-naturalize and integrate Four Mile Run stream into the parks.

More in Engagement and Outreach, Environment

The County has been recognized by the Virginia Association of Counties for its energy efficiency, green buildings, stormwater management and land use.