The County Board voted unanimously Wednesday night to adopt the Rosslyn Sector Plan, a 25-year plan designed to transform this economic hub into a more walkable, dynamic, live-work-shop-play urban center and vibrant gateway to Arlington.

“An intensive, broad-based community effort has produced an exciting new vision for Rosslyn, and a roadmap for achieving it,” said Arlington County Board Chair Mary Hynes. “For nearly three years, residents, developers, business leaders, property owners and County commissioners worked with County staff to create this plan for revitalizing and transforming one of our oldest urban neighborhoods. Everyone who participated should be proud of what we’ve achieved together.”

The Rosslyn Sector Plan is the first in-depth review since the Rosslyn Station Area Plan Addendum was adopted in 1992. It comes at a time when central Rosslyn is experiencing its second generation of redevelopment since the County applied its first site plan process there 50 years ago, and as County forecasts anticipate that Rosslyn’s population will continue to grow. The long-range sector plan provides both a vision and a guide to growth and development in the Rosslyn Coordinated Redevelopment District (RCRD), the area that lies within the boundaries of the North Rosslyn and Radnor Fort Myer Heights Civic Associations.

Some of the plan’s transformative elements:

Working together to envision a new future for Rosslyn

The County kicked off the Realize Rosslyn community planning effort in December 2012. Throughout the Realize Rosslyn planning process, County planners involved the community in variety of ways from traditional public workshops, outreach events, one-on-one meetings, to more virtual civic engagement such as blog posts, social media and virtual forums to find out what the community believes Rosslyn should look like in the future. Staff responded to hundreds of questions and comments, and fine-tuned the plans based on the public’s feedback. Learn more about the Rosslyn neighborhood.

To read the staff report on this item, visit the County website. Scroll down to Item #41 on the Agenda for the Wednesday, July 22 Recessed County Board Meeting. 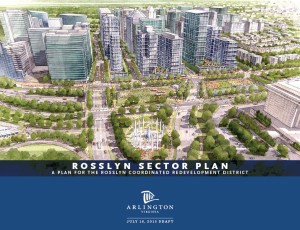 The Board adopted a plan that meets some of the County's highest priorities for public facilities.