Five furry four-legged visitors were the latest creative approach by the Arlington County Sheriff’s Office to reduce reoffending among inmates. And this program had an extra layer of meaning because it came from the inmates themselves.

Last month, the Sheriff’s Office, along with the Department of Human Services (DHS), partnered with DC-based nonprofit People. Animals. Love. (PAL) to bring therapy dogs in to meet inmates at the Detention Center. Inmates in the Moral Reconation Therapy (MRT) group brought the idea to the attention of their mental health therapists. MRT is a treatment approach used by detention centers to decrease the chances an inmate will re-offend by increasing moral reasoning.

Research shows that pet therapy can develop inmates’ thinking by providing a non-judgmental interaction based on unconditional love, which promotes positive self-regard and trusting relationships. These improvements have been shown in several areas, including safety, trustworthiness, peer-support, self-help, collaboration and empowerment.

After researching the idea and getting approval from the Sheriff’s Office, five PAL volunteers brought their therapy dogs to visit the inmates.

The goal was to tie the pet therapy to the concepts the inmates learn in Moral Reconation Therapy, specifically assessing current relationships, reinforcing positive behavior and habits, forming a positive identity, enhancing self-concept and developing the higher stages of moral reasoning.

“The Sherriff’s Office has provided us with an opportunity to be creative in our treatment approaches which helps engage with inmates that normally wouldn’t engage,” said Captain Gretchen Foster, who oversaw the PAWS event. “The Sheriff’s Office is progressive in its treatment initiatives and offers a wide variety of programs in hopes to reduce recidivism and increase positive self-regard and morality.”

During the April 9 event, inmates spent 90 minutes interacting with both the dogs and their handlers, learning each dog’s story and sharing information about themselves. While it was only a pilot event, the Sheriff’s Office is working on a proposal that would allow for quarterly pet therapy events. 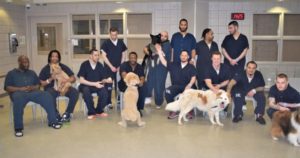 Exercise. It helps us maintain physical fitness and health. It can also boost our mental wellbeing and happiness. These are...