ARLINGTON, Va. – The Arlington County Police Department is announcing the arrest of a Falls Church man for his role in last night’s shooting in the Boulevard Manor neighborhood. Jhonatan Zavaleta Cruz, 21, has been charged with Aggravated Malicious Wounding, Attempted Malicious Wounding, Use of Firearm in the Commission of a Felony and Shooting During the Commission of a Felony. He is being held in the Arlington County Detention Facility on no bond.

At approximately 11:15 p.m. on November 6, police were dispatched to the 6000 block of Wilson Boulevard for the report of a shooting. Upon arrival, officers located a juvenile male victim suffering from a gunshot wound and immediately began rendering aid. The victim was transported by medics to an area hospital with injuries that are considered non-life-threatening.

The preliminary investigation indicates that the suspect and victim are known to one another and that a verbal dispute preceded the shooting. There is no indication of an ongoing threat to the community.

This remains an active criminal investigation and anyone with information is asked to contact Detective R. Ortiz of the Homicide/Robbery Unit at 703-228-7402 or Rortiz@arlingtonva.us. Information may also be provided anonymously through the Arlington County Crime Solvers hotline at 1-866-411-TIPS (8477). 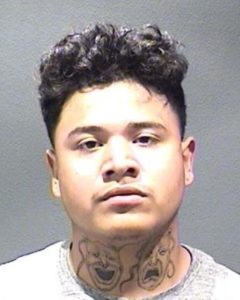 Help make the holidays bright for Arlington County children in need by donating to the fifth annual Fill the Cruiser...