ARLINGTON, Va. – The Arlington County Police Department has arrested and charged a suspect for his role in an early morning shooting on Columbia Pike. Aaron Steele, 29, of No Fixed Address has been charged with Aggravated Malicious Wounding, Shooting in the Commission of a Felony, Aggravated Malicious Shooting, Discharging a Firearm within 1,000 feet of a School, Use of a Firearm During Commission of a Felony and Violation of a Protective Order. He is being held in the Arlington County Detention Facility on no bond.

At approximately 12:48 a.m. on September 12, police were dispatched to the 3100 block of Columbia Pike for the report of a shooting. Upon arrival, officers located an adult male in the roadway suffering from a gunshot wound and immediately began rendering aid. The victim was transported by medics to an area hospital where he is listed in critical but stable condition.

During the course of the investigation, officers developed a possible suspect description based on evidence located at the scene and witness interviews. A lookout was broadcast and a patrol officer traveling in the area of Walter Reed Drive and Columbia Pike observed the suspect on foot and took him into custody without incident.

The preliminary investigation indicates that the suspect and victim are known to one another and that a dispute preceded the shooting. This is an isolated incident and there is no evidence of any continued threat to the community.

This incident remains under investigation and anyone with information is asked to contact Detective S. King of the Arlington County Police Department’s Homicide/Robbery Unit at 703-228-4243 or seking@arlingtonva.us. Information may also be provided anonymously through the Arlington County Crime Solvers hotline at 1-866-411-TIPS (8477). 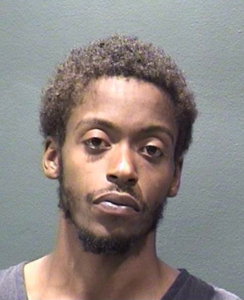