ARLINGTON, Va. – The Arlington County Police Department announces the release of the 2019 Annual Report. The report is a showcase for the initiatives, programs and accomplishments of the Department and its personnel throughout the year, as well as crime and transportation safety data. The report is organized into three sections, which reflect the key initiatives adopted by the Department in 2016—crime prevention and control, transportation safety and community engagement.

The Annual Report is the official release of crime statistics by the Department for the preceding year. It is reflective of year-end statistics submitted to the state in March, presented based upon the Federal Bureau of Investigation’s National Incident-Based Reporting System format. Investigative updates, as well as the re-classification of cases, can occur throughout the year, making the data dynamic as amendments are made. The most updated data, which may not be consistent with what is included in this report, is available on the Virginia State Police website.

For the first time since 2013, crime trended upwards, with increases in the number of Group A offenses, as well as Group B Arrests. Despite the increase, the number of offenses reported remains within normal range of the five-year trend. The total number of offenses, as well as the violent crime rate (offenses per 100,000 persons) remain below the 2018 FBI Uniform Crime Reporting national average. The use of online reporting increased by 27.6% in 2019, primarily accounting for increased numbers of reports of low-level property offenses. 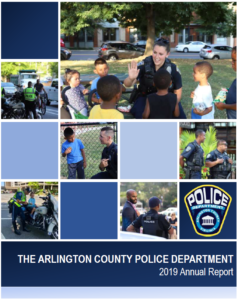 The Arlington County Police Department’s Critical Accident Team is investigating a fatal single vehicle crash that occurred on the evening...