ARLINGTON, Va. – The Arlington County Police Department has released the 2017 Annual Report, highlighting the many endeavors the men and women of this department undertake to maintain Arlington County as a safe place to live, work and visit. In 2016, the agency adopted three key initiatives to guide staff as we continue to delivery professional police services to the community. These initiatives are community engagement, transportation safety and crime prevention and control. The 2017 Annual Report reflects accomplishments in each initiative throughout the year.

Included in the annual report are the 2017 crime statistics. Arlington’s overall crime rate, which is comprised of Part I Offenses, as defined by the Federal Bureau of Investigation, decreased by 7.74% in 2017. The grand total of Part I Offenses (homicide, rape, robbery, aggravated assault, burglary, larceny and motor vehicle theft) was 3,240, down from 3,512 in 2016. 2017 is the sixth consecutive year in which the crime rate in Arlington County has trended downward.

The majority of crimes reported to the Arlington County Police Department each year are defined as Part II Offenses, which include various other felony and misdemeanor crimes. The number of Part II offenses reported increased marginally from 7,288 in 2016 to 7,438 in 2017, a 2% change. Calls for service received by the Police Department decreased 6.2% from 83,511 in 2016 to 78,330 in 2017.

Traffic statistics also reflected a decrease in 2017 as the number of reportable crashes decreased from 2,711 in 2016 to 2,515 in 2017. Crashes involving pedestrians increased by 8 to 135 in 2017, however, this remains consistent with the overall five-year trend. The number of reportable bicycle-involved crashes increased from 32 in 2016 to 80 in 2017. In 2017, more reports were taken for bicycle-involved crashes in 2017, likely due to the Police Department’s increased focus on bicycle safety. In 2017, there were 5 traffic-related fatalities in the County.

The Arlington County Police Department remains committed to serving Arlington’s neighborhoods with duty, honor and commitment each day. We work to proactively patrol the neighborhoods to prevent and reduce crime, maintain the safe and orderly flow of traffic, foster strong community partnerships, and effectively communicate with those we serve to ensure their trust. By working collaboratively with the community, we can continue to maintain the safety of Arlington County. 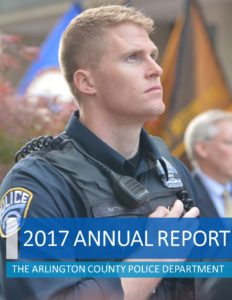 ARLINGTON, Va. – The 2018 Animal Welfare League of Arlington Walk for the Animals Fundraiser will take place on Saturday,...