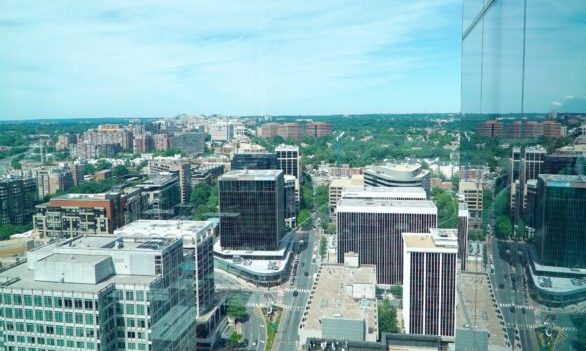 Show up at CEB Tower in Rosslyn with valid proof of your Arlington residency, get a timed-entry ticket, and soon you’ll be whisked up 31 floors in a glass elevator to the first public observation deck of its kind in the DC area — for free.

Through floor-to-ceiling windows — or from an open-air terrace one floor up — you’ll see Arlington and DC like few have before, with unique views of Arlington National Cemetery, Reagan National Airport, and the bustling Rosslyn-Ballston corridor, along with the U.S. Capitol, monuments on the National Mall and more.

The Observation Deck at CEB Tower opened to the public on June 21 and is managed by the same company that operates One World Observatory in New York City. While the company is charging admission to visit the deck, it is waiving that charge for Arlington residents in recognition of the space’s value as a public amenity for the Arlington community. 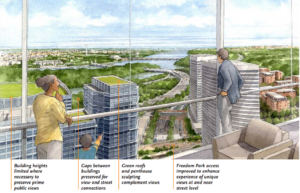 An artist’s rendering of design elements aimed at optimizing views from the observation deck.

The observation deck is part of a larger plan to bring new energy to Rosslyn. Known as the Rosslyn Sector Plan and adopted in 2015, it calls for transformational improvements over the next 25 years to the area’s skyline, streetscapes, transportation network, parks and residential and commercial development patterns.

The observation deck is one of several elements aimed at establishing an important gateway and visual connection between Arlington and the Nation’s Capital. Carefully varied building heights and forms and intentionally placed green spaces will help create a dynamic skyline and optimize views from the deck.

MORE: Learn about the transformation envisioned in the Rosslyn Sector Plan

It’s not just views you get from the Observation Deck at CEB Tower. There’s little-known history, too—about the CIA, I-66, the Watergate and more, all of which are visible from the deck. And there’s a café and bar, offering snacks and drinks while you enjoy the 12,000-square-foot space.

To manage crowds and ensure a pleasant, unhurried experience, the deck uses timed-entry ticketing. Arlington residents looking to gain free admission must go to the box office in person and receive a ticket for the next available time, or another day or time in the future. They must also show valid proof of residency.

Non-residents can get tickets at the door or go online to choose their entry time in advance. Admission for non-residents is $21 online or $22 at the door, with discounts for youth, students, military and seniors.

PHOTOS: Views from the Observation Deck at CEB Tower

The Observation Deck at CEB Tower is open seven days a week, 10 a.m. to 8 p.m. Monday through Friday, and 9 a.m. to 8 p.m. on Saturday and Sunday. Learn more at theviewofdc.com.

PHOTOS: Views from the Observation Deck at CEB Tower

We got a sneak peek of the Observation Deck a few days before it opened. Check out some of our favorite views in the album below. 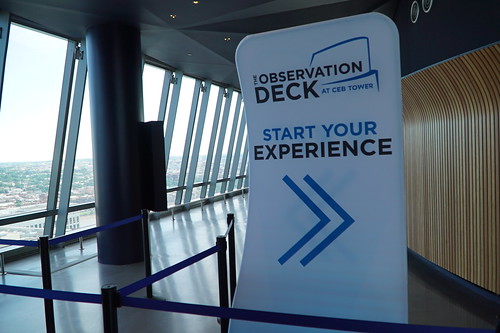 The Roads of Arlington (Now) Paved with Better Preventions

It’s the end of the road for bricks and brick-like ornamentation on Arlington streets, as the County phases out brick...