The Arlington County Board today approved an in-fill development plan that will add 401 new apartments to the existing Wellington Apartments at 1201 South Rhodes Street, south of Columbia Pike, and convert 105 existing apartments to committed affordable units.

The development also will include a public mini-park, new public streets and a nine-level parking garage, with three levels below ground. The developer has agreed to achieve LEED Silver energy efficiency standards.

The new six-story building, by WashREIT Wellington Apartments LLC, will be developed under the Columbia Pike Neighborhoods Form Based Code (N-FBC). The developer plans to retain three existing mid-rise buildings fronting Columbia Pike and South Scott Street, with a total of 711 units. One-hundred-and-five of those units will be converted to committed affordable units, contractually obligated to remain affordable for 30 years. The developer will pay for the committed affordable units, using no County loans.

“Our efforts to revitalize the Pike through innovative approaches to land use and zoning, while striving to preserve its stock of affordable housing, continue to show results,” said County Board Chair Libby Garvey. “This is an example where a developer, by choosing Form Based Code, is maximizing this site’s potential and adding both committed affordable and market rate housing to the Pike.”

The Board voted 5 to 0 to approve the use permit.

To read the County staff reports about this item, scroll down to item No. 61 on the agenda for the July 20, 2016 County Board carryover meeting.

The 3.54-acre site lies within the Columbia Pike Neighborhoods Special Revitalization District. The County approved the Neighborhoods Special Revitalization District in 2013 to help achieve the community’s vision of sustaining a supply of housing along the Pike to serve a community with a broad mix of incomes, while improving streetscape environments and fostering a walkable community.

Form Based Code (FBC) standards for Columbia Pike help achieve the vision by regulating land development and emphasizing building form, size and placement, rather than the density and use on which traditional zoning regulations are based.

To learn more, visit the project page on the County website. 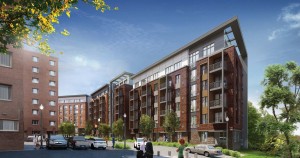 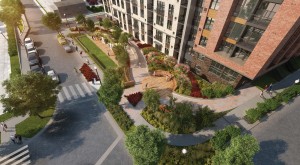