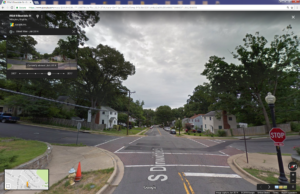 It’s the end of the road for bricks and brick-like ornamentation embedded in the streets of Arlington.

The County is phasing out the use of brick pavers, along with similar nostalgic looking “street print,” an asphalt-pavement product used to define pedestrian crosswalks, medians and neighborhood boundaries.

The cost to maintain such features had become particularly prohibitive when compared with more flexible, resilient and traditional materials. Paver and street-print markings — often in dark, clay-like hues — also failed to generate significant reductions in traffic speeds and demonstrated poor visibility in low light and during precipitation. They also often lost their quaint appearance when street and underground repairs were necessary.

Over time, existing street print and brick paver examples are being replaced as part of the County’s street repaving capital program. Crews now install high-visibility white thermoplastic markings that are extremely reflective — particularly at night and in rain, and, with less needed maintenance, more cost-effective.

Adrienne Griffen is the founder and executive director of Postpartum Support Virginia (PSVa), which she started to fill a gap in...