The past year in Arlington was an especially good year. From budget roundtables to launching the Joint Facilities Advisory Commission; from filling over 2,600 potholes to handling more than 83,000 emergency calls; from ribbon cuttings at renovated parks to a continued focus on transparent government; from welcoming businesses to leading the way in sustainability and environmental efforts. Indeed, 2017 was a good year in Arlington County, laying the foundation for great years to come.

But before looking ahead, we wanted to reflect back on the year that was, with the 10 most popular stories in the Arlington County Newsroom:

The Rosslyn Streetscape Elements Plan, a partnership between the County and the Rosslyn Business Improvement District two years in the making and approved in June, is bringing a more unified, vibrantly urban look to Rosslyn’s public spaces. The BID installed benches, planters, bike racks, and more, — all with the same custom, laser-cut pattern emulating Rosslyn’s nighttime skyline. The rollout of these pieces will continue over in the coming months and years.

It all fits in with the County and community’s long-term planning effort to realize the vision in the Rosslyn Sector Plan: to reshape the second generation of redevelopment in Rosslyn’s downtown core into a more walkable, transit-oriented, lively and vibrant urban village.

In October, the Board took a big step to increase pedestrian safety by giving the go-ahead on improvements at the intersection of Clarendon Boulevard and 15th Street North. The project is part of, and funded by, the County’s WalkArlington initiative to create a more walkable Rosslyn-Ballston (R-B) Corridor, will include new safety and streetscape improvements, ADA compliant sidewalks, benches and bike racks, while also improving the circulation of the Courthouse Plaza parking garage.

The free app from Arlington County, released in April, puts the public library within reach of iPhone and Android users wherever you may be. The free app allows users to search the catalog, manage your accounts, book meeting rooms and access library information and operating hours. Download it today by searching “Arlington Public Library” in the Apple or Google Play store.

The Board took the first steps to realize a vision outlined in the 2015 Western Rosslyn Area Plan (WRAP) when in February it approved several use permits and site plans to deliver a new school, new fire station, transportation network improvements, parks and open space, affordable housing, retail and new residential space to the Western Rosslyn community by 2021.

In April, the Board voted 5-0 to make way for a new elementary school at the Thomas Jefferson site (125 S. Old Glebe Road); Arlington Public Schools plans to open the new 752-seat elementary school in September 2019. The school is designed to use significantly less energy than comparable APS facilities, and will include a gym wall that opens to the outside to create an outdoor theater and play areas that will be open to the public outside of school hours.

4. Arlington Abuzz with Rescue of Thousands of Bees

When Arlington County acquired a former office building as part of the Nauck Town Square project, it didn’t realize it had also acquired an enormous honey bee network. Vacant since March, the building was set to be demolished, but when staff discovered the elaborate hives, they contacted David and Emily, a husband-and-wife team of beekeepers who happen to live in Nauck. On a hot Saturday in June, the couple spent six hours painstakingly removing the hive, keeping as much intact as possible to transport it to a local community garden at 10th and Barton streets.

3. Arlington United Against Racism and Bigotry

Following the tragedy that occurred in Charlottesville in August, the Arlington County Board issued a statement to “[condemn] the act of domestic terrorism … ” and confirm that “Arlington rejects the hateful speech and actions of the KKK, white supremacists, neo-Nazis and the alt-right movement.” It was also an opportunity to remind the community that “Arlington’s story is an inspiring one of racial and social progress, of moving forward and overcoming the deep wounds inflicted by slavery, the Civil War, Jim Crow and the legacy of segregation.”

The redesign of Clarendon Circle – to make it more accessible and safe for pedestrians, cyclists and motorists traveling through the intersection of Wilson and Clarendon boulevards and Washington Boulevard – took important steps forward in February of 2017. Redesign of the circle, recommended and supported in both the Master Transportation Plan (MTP) and Clarendon Sector Plan, includes reducing intersection size, improving area lighting, adding on-street bike lanes and improving bike routes, and more.

In February of this year, we were thrilled to welcome Nestlé USA to our community as the world’s largest food company announced it would relocate its corporate headquarters from California to Rosslyn, creating over 700 jobs in the process. Nestlé has already started its move into 1812 North Moore Street in Rosslyn, the tallest building in the metropolitan D.C. area.

This year, we were excited to announce we'd be moving our U.S. headquarters to a new home – Arlington County, Virginia: https://t.co/rcZuPMA74G #Nestle2017 pic.twitter.com/7cu7zVLqZv 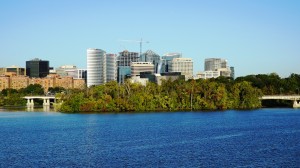 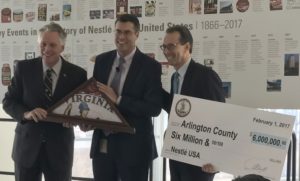 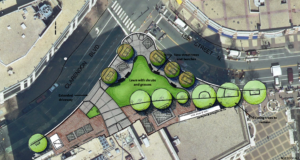 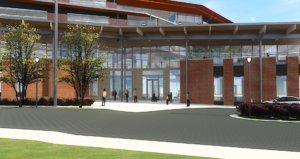 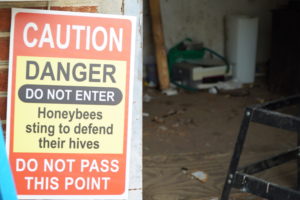