ARLINGTON, Va. – The 34th annual Army Ten-Miler race will occur on Sunday, October 7, 2018. The course route has changed this year resulting in traffic impacts to the Rosslyn area in addition to closures near the Pentagon. The race begins at 7:50 a.m. on Route 110, continues into Rosslyn and crosses into the District of Columbia using the Francis Scott Key Memorial Bridge to Whitehurst Freeway, returns to the Commonwealth via I-395 HOV and ends in the Pentagon north parking lot.

The following roads in Arlington County will be affected:

In addition, access to the Pentagon north parking lot will be restricted to “Authorized Vehicles Only” from 4:30 a.m. to 2:00 p.m.  Parking for Pentagon employees and Pentagon Memorial patrons will be available in the south parking lot via Columbia Pike and S. Fern Street.

Runners, spectators and support personnel are encouraged to use Metro, which will open on hour earlier at 7:00 a.m., as parking is limited. The Pentagon and Pentagon City stations on the Blue and Yellow Lines are located within walking distance of the start and finish lines. A designated rideshare drop-off and pick-up zone has been designated at S. 12th Street at S. Hayes Street.

Bicyclists and pedestrians traveling in the Rosslyn area, including along the Custis Trail and Mount Vernon Trail, may experience delays near the race route. 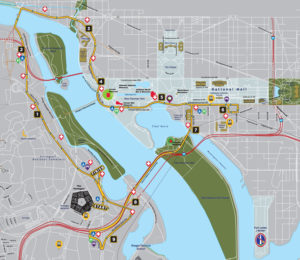 Public Invited to Celebrate National Coffee with a Cop Day

Wednesday, October 3 is National Coffee with a Cop Day and ACPD is hosting events at Starbucks - Penrose and...