ARLINGTON, Va. – The 35th annual Army Ten-Miler race will occur on Sunday, October 13, 2019. The race begins at 7:50 a.m. on Route 110, crosses the Key Bridge into the District of Columbia, returns to Virginia via I-395 HOV, and ends in the Pentagon North Parking lot. The Arlington County Police Department, Virginia State Police, United States Park Police and the Pentagon Force Protection Agency will conduct numerous road closures in the area of the Pentagon in order to accommodate this event.

The following roads in Arlington County will be affected:

In addition, access to the Pentagon North Parking lot will be restricted to “Authorized Vehicles Only” from 4:30 a.m. to 2:00 p.m.  Parking for Pentagon employees and Pentagon Memorial patrons will be available in the South Parking lot, which is accessible via Columbia Pike and S. Joyce Street.

Getting Around on Race Day

Runners, spectators, and support personnel are encouraged to use Metro and ridesharing services, as parking in the area is limited. The Pentagon and Pentagon City stations on the Blue and Yellow Lines are located within walking distance of the start and finish lines.

Runners and spectators arriving by vehicle may be dropped off at the Hayes Street parking lot, located near the intersection of Army Navy Drive and S. Hayes Street. Motorists accessing these areas should follow signs for Pentagon City.

See Something, Say Something®

The safety and security of runners and spectators remains a top priority for law enforcement. The public is encouraged to be vigilant and attentive, particularly in areas with large crowds of people. Suspicious person(s), items, vehicles and unattended packages should be reported immediately to police for investigation. Spectators and runners may report information directly to police personnel stationed throughout the race route and by calling the Army’s race day suspicious activity hotline at 202-309-4261 or 9-1-1 in an emergency.

Register for Arlington Alert to receive emergency alerts and other important information from Arlington County Government. In the event of a weather-related emergency or unforeseen circumstance, follow police direction.

Runners and spectators can also subscribe to receive emergency alerts and advisories specific to the Army Ten-Miler race via the Nixle Alert System, which is maintained by the United States Park Police. To subscribe, text ARMYTEN to 888777. Standard text messaging rates may apply.

For more information about the Army Ten-Miler, visit the official website. 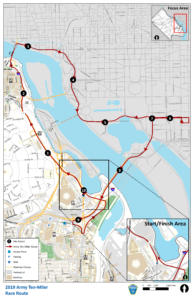 Census and Preparedness: An Important Partnership

It's National Preparedness Month. Find out how Census data helps Arlington to “be prepared, not scared” in the face of an emergency.