ARLINGTON, Va. – On Thursday, June 18, the Arlington County Police Department’s Special Operations Section will support Senior Graduation Parades for Wakefield High School and Washington-Liberty High School. Traffic around the schools will be impacted at the below listed times. The public can expect to see increased vehicle and pedestrian traffic in the surrounding neighborhoods.

The following locations will be impacted from approximately 11:00 AM to 12:30 PM:

Note: There will be minimal, if any, impact on the scheduled Kindergarten event at Claremont Elementary School.

The following locations will be impacted from approximately 3:00 PM to 4:30 PM:

Note: The COVID-19 sample collection site at 1429 N. Quincy Street will not be impacted.

Additional roadways may be closed for short periods of time in the interest of public safety. 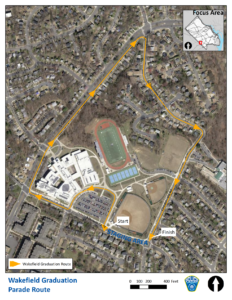 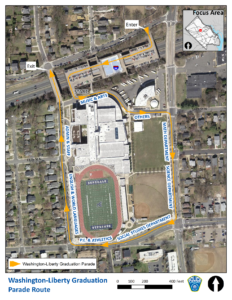 The Arlington County Board will hold a virtual listening session on racial justice/ systemic racism/ policing on Thursday, June 18,...